TEHRAN (Defapress) - News sources reported on Tuesday evening that a siren sounded in Tel Aviv in reaction to the aggression of the Zionist regime on the occupied lands and territories.
News ID: 83333 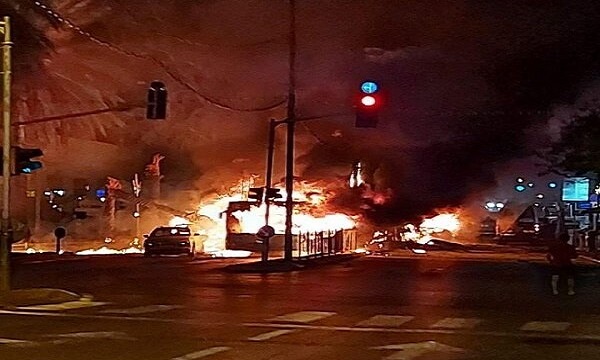 The Zionist regime reported that two settlers were killed and dozens other were injured after hundreds of Palestinian rockets were fired from Ashkelon.

Al-Alam correspondent has reported that the Zionist regime bombed residential buildings in the Sheikh Zayed neighborhood in the northern Gaza Strip.

Video footages show that some of the Palestinian rockets have hit Zionist settlements, causing damages to their facilities and buildings.

The Palestinian medical sources in Gaza said on Tuesday that so far as many as 28 Palestinians have been martyred in the Israeli aerial raids on Gaza, ten of whom are children.

They have also put the number of the injured at 152.

Palestinian sources reported this afternoon the widespread rocket attack by Palestinian Resistance forces on the occupied cities of Ashdod and Ashkelon in the northern Gaza Strip.

According to Zionist sources, sirens went off warning of rocket attacks in those settlements and towns around the Gaza Strip.

Images released in Zionist sources show that a number of rockets hit a building.

Zionist and Palestinian sources have not yet published a report on the possible casualties of rocket attacks by Resistance groups on the occupied cities.

News sources reported that Iron Dome systems were unable to intercept rockets fired from the Gaza Strip and that a number of rockets hit buildings directly.

The Palestinian news agency Shehab quoted a Zionist correspondent as saying that more than 60 rockets had been fired from the Gaza Strip at Ashdod and Ashkelon so far, with initial reports indicating that five people had been injured and several buildings were damaged.

As more Israeli artillery and tanks transferred to the areas around the Gaza Strip, the Zionist regime's War Minister Benny Gantz on Tuesday ordered the continuation of the aggressive attacks on the Gaza Strip.

According to Sky News, instructions were issued for the Israeli army to continue its attacks on the Gaza Strip, following Gantz today's meeting with Benjamin Netanyahu and other security officials.

Gantz also allowed the regime's Department of Homeland Security to call in 5,000 of its reserve forces to deal with Palestinian protesters in various parts of the occupied territories.

The Zionist media also reported that the regime's army is strengthening its position around the Gaza Strip and there is also the possibility of launching ground operations against Palestinian resistance groups.

Palestinian sources reported that Israeli planes targeted a house in the Al-Rimal neighborhood of Gaza. Preliminary reports indicate that three people, including a child, were injured in the attack.

The Shehab news agency also confirmed the report, saying that the attack took place in the center of the Gaza Strip, injuring three people.

Moments later, the Shehab news agency reported that the death toll had risen, with two people killed and eight others injured in the attack.