Hakim calls on Europe to take stance against Zionists' crimes

TEHRAN (Defapress) - In a meeting with the German envoy in Baghdad, the Leader of Iraq's National Wisdom Movement Ammar al-Hakim urged Europe to take a stance against Zionists' crimes in occupied lands.
News ID: 83358 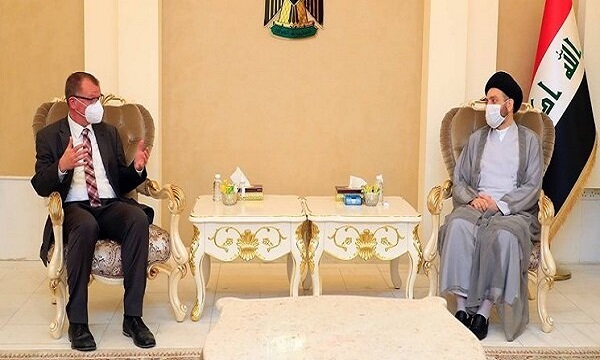 In the meeting with Ole Diehl, Ammar Hakim urged Germany to take a formal stance in support of Palestine.

He also stressed the importance of developing relations between Baghdad and Berlin and the presence of German companies in the Iraqi market.

By Tuesday, more than 52,000 Palestinians have been displaced by the Zionist regime's airstrikes that have destroyed or badly damaged nearly 450 buildings in the Gaza Strip.

About 47,000 of the displaced people have sought shelter in 58 UN-run schools in Gaza, Jens Laerke, spokesman of the United Nations Office for the Coordination of Humanitarian Affairs (OCHA), told reporters.

Laerke also said 132 buildings had been destroyed and 316 had been severely damaged, including six hospitals and nine primary healthcare centers.

The Zionist regime continued its air raids on Gaza as day broke on Tuesday.

Explosions were heard and balls of fire and plumes of smoke were seen rising from several buildings in Gaza City, Al-Jazeera reported.