Islamic Revolution stronger than ever 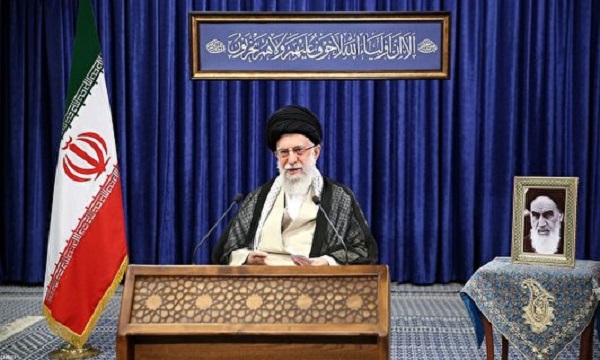 He made the remarks on Friday while delivering a live speech on the occasion of the 32nd demise anniversary of the founder of the Islamic Revolution Imam Khomeini (RA).

The Islamic Republic is a unique initiative set forth by the late Imam Khomeini, praised Ayatollah Khamenei.

Ill-wishers have always been after animosity with Islamic Establishment, repeating claims that the Islamic Republic is coming close to its end, he added.

ut thanks to God the Islamic Revolution did not collapse, rather it conquered different barriers, added the leader. "Today the Islamic Republic is more strong and advanced compared to 40 years ago."

The secret behind the perseverance of this system is just two words “Islamic” and “republic”, he stressed.

"Our magnanimous Imam's great act was that he created and actualized this idea of an Islamic Republic. The base for the realization of that theory was his deep knowledge of Islam and people."

Islamic Republic has face opposition from different camps such as seculars, liberals, and groups who believed people should have no role in government, said the Leader.

Muslims have a religious duty to decide on the condition of their society, added the Leader, citing Islamic religious texts.

The Islamic Republic was once a tiny seedling but now it is a strong tree that cannot be uprooted with the strongest winds, added the Leader.

The Islam that Imam Khomeini believed was an Islam that opposes arrogance, hegemony, and corruption, highlighted Ayatollah Khamenei, adding,  Imam Khomeini viewed elections as a manifestation of people’s will.

Enemies’ claims about democracy in Iran are only aimed at targeting the Islamic aspect of the system, said the Leader.

Those who say that Islam should not be associated with the government are repeating enemies’ claims, he noted, adding, enemies are seeking to create a rift between people and Islamic Establishment.

Inviting people to participate in the election, Ayatollah Khamenei said that the path to resolving the current problems of the country lies in the election.

People should not put total trust in candidates’ promises, said the Leader, also advising candidates to not set forward promises that cannot be practically implemented.

He also called on people to ask and encourage others to take part in the elections.

The next president should promise to stand firm against corruption and smuggling and enhancing the country’s domestic production, added the Leader. "They must state this today so that if they do not do so after winning, supervisory bodies can hold them accountable."

During the vetting process, some candidates were accused of untrue things that were unfortunately spread throughout social media too, he said, adding, protecting people’s honor is one of the most important issues. "I call on the responsible bodies to restore their honor."