TEHRAN (Defapress) - The Leader of the Islamic Revolution said Wednesday that the Western media and enemies seek to undermine and weaken Iran, stressing that people participation in elections will secure the country against foreign plots.
News ID: 83464 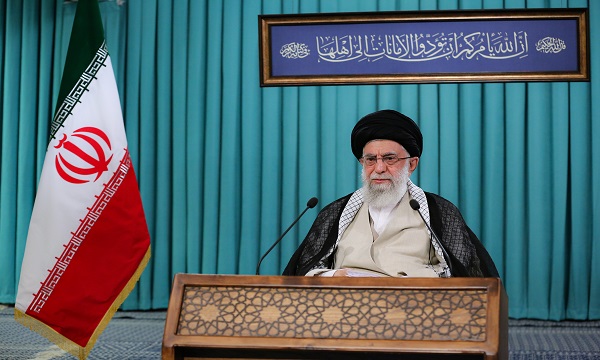 Leader of the Islamic Revolution Ayatollah Seyyed Ali Khamenei is delivering a speech two days before the 2021 presidential and city council elections in Iran.

The Leader said at the start of his speech today that the destiny of the country depends on people's votes in elections.

He said all the satanic powers and power centers that oppose the Islamic revolution in the past decades have sought to tarnish people's minds and have sought to interfere in Iran’s elections. But, the Leader noted that all the lections have taken place on time and there has not been a single day of delay in holding elections.

Later, Ayatollah Khamenei said Western media have been trying to question Iran’s elections. Meanwhile, he said that the people's participation will give more prestige to the Islamic Republic establishment.

As the people took part in Gen. Soleimani’s funeral regardless of their political affiliations and tastes, the leader said, all Iranian must participate in elections regardless of political tastes.

The most important point is that elections shows that the Islamic Republic enjoys support of the people, according to Ayatollah Khamenei. “There is no power superior to people’s power,” Leader underscored.

He said that people participation will disappoint enemies once again, saying that an action that disappoints enemies is considered a good deed.

Enemies seek to undermine participation of people in election to weaken Iran, he said. Ayatollah Khamenei further said that Iranian elections have been quite healthy and competitive.

He later touched upon Iranian nation’s achievements despite being under sanctions, saying that Iran’s young scientists managed to develop vaccine despite difficulties imposed on the country.

In part of his speech, the Leader implicitly referred to the London-based Persian language TV channels which are financed by Arab rulers, saying that “the irony is some countries that are ruled by tribes in the middle of the 21st century and they have had no experience of elections at all while their people do not distinguish ballot boxes from fruit boxes, they have established media to target Iran’s elections. “