Iran fully prepared to react harshly to any enemy 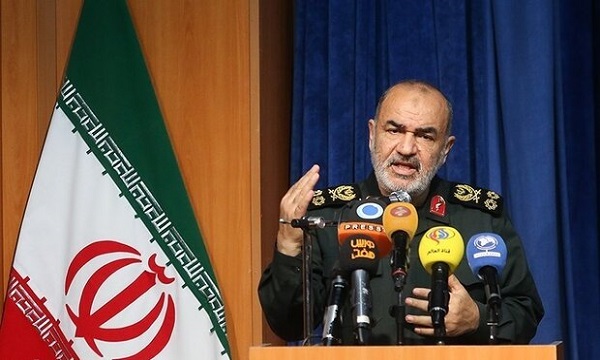 Commander-in-Chief of the Islamic Revolutionary Guard Corps (IRGC) Major General Hossein Salami made the remarks on an inspection visit to Iranian forces stationed at the Persian Gulf and the Hormuz Strait.

On the visit, Gen. Salami said that the Zionists, who have raised their rhetoric against the Islamic Republic of Iran recently, must see the real level of Iran's offensive and defensive power.

"In our defense policies and strategies, there is no action from any enemy at any point on any scale that is acceptable and does not force us to react harshly and decisively," the IRGC chief added.

The IRGC Commander-in-Chief emphasized that Iran's defensive and offensive forces are fully prepared for tough reactions to any enemy, adding that "We are ready for any scenario ... These preparations exist in various areas of our defense."

"Today, our missile, defense, naval and drone systems and ground forces are at an unprecedented level of preparedness that can respond to any threat at any scale, anywhere," Gen Salami further underscored.

He also said that the enemies must know the time is over for them to be able to "threaten our interests or forces somewhere, with no reaction."

"Our message is not a diplomatic message, but it is a message based on the reality on the ground," Gen. Salami said, adding "Those who speak against us with an intimidating language, including the Prime Minister of the Zionist regime and other officials of this regime, must know the dangerous consequences of what they are saying and must be careful in their calculations."