No difference between Biden, Trump demands

TEHRAN (Defapress) - Stating that there is a predatory wolf behind the scenes of US foreign policy that sometimes turns into a cunning fox, Ayatollah Khamenei said there is no difference between Biden and Trump's demands.
News ID: 83734 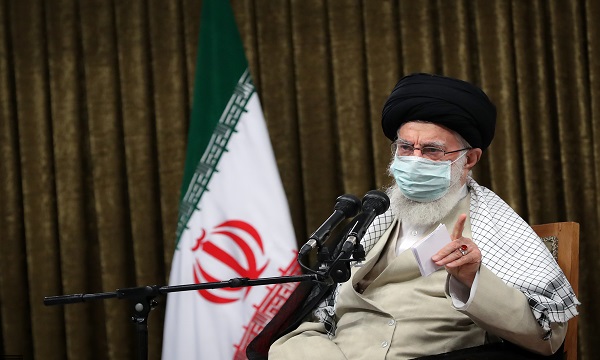 In their first meeting after almost all of his proposed ministers were approved by the Parliament, Iranian President Ebrahim Raeisi and his Cabinet met with the Leader of the Islamic Revolution Ayatollah Khamenei on Saturday at Imam Khomeini Hussainia.

"I have had a recommendation to all the officials in past periods, I also recommend you to seize the opportunities as time passes quickly," the Leader said during the meeting.

Ayatollah Khamenei also recommended the officials do their best to serve the people.

The Leader also appreciated the surprise visit of Iranian President Ebrahim Raeisi to the southern province of Khuzestan on Friday, calling it a manifestation of being popular.

Ayatollah Khamenei also said that restoring people's trust and creating hope among them are of the government's important duties.

Elsewhere in his remarks, the Leader considered the expansion of foreign trade with 15 neighboring countries as well as many other countries in the world, except for one or two cases, necessary and possible.

The Leader also pointed to the US government and its policy, saying, "The Americans have been really rude in the nuclear issue, and despite the fact that they left the JCPOA, they are now talking and claiming that the Islamic Republic has left the deal and its obligations. While for a long time after the withdrawal of the United States, nothing was done by Iran, and after a while and with the announcement, some obligations and not all of them were set aside."

"There is a predatory wolf behind the scenes of US foreign policy that sometimes turns into a cunning fox. The situation in Afghanistan today is an example of US policy," the Leader added.

Ayatollah Khamenei called Afghanistan Iran's brother and expressed deep regret over the problems of the people, including the incident on Thursday at Kabul Airport. "Afghanistan is our brother country, with the same language, religion and culture."

Americans are behind all the incidents that have happened in Afghanistan constantly as they occupied this country for 20 years and inflicted all kinds of oppression on them, he added.

The bombing of weddings and funerals, the killing of young people, the unjustified imprisonment of many people, and the increases in drug production were some of the negative effects of the American presence in Afghanistan that the Leader pointed out.

Referring to the scandalous leaving of the Americans and the transfer of their Afghan colleagues to areas with a worse situation than Afghanistan, Ayatollah Khamenei said, "We are for the people of Afghanistan. The nature of Iran's relationship with governments also depends on the nature of their relationship with Iran. We ask God for goodness and salvation from this situation for the people of Afghanistan."