5 missing in US Navy helicopter crash near San Diego

TEHRAN (Defapress) - One sailor was rescued and five others were missing after a US Navy helicopter crashed in the water off the coast near San Diego.
News ID: 83757 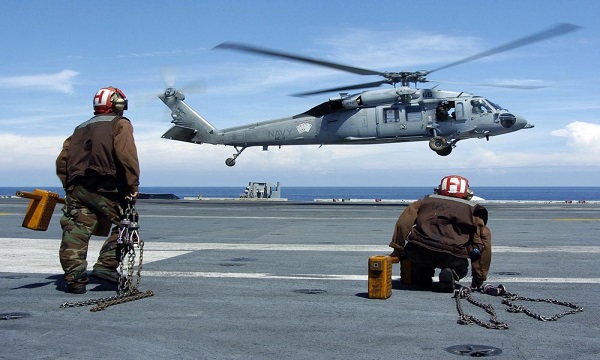 The cause of the crash was not immediately clear. In a statement, the Navy’s Third Fleet said the helicopter was operating on the deck of the USS Abraham Lincoln, a Nimitz-class aircraft carrier before it “crashed into the sea” at 4:30 p.m. local time, NY Times reported.

Navy officials said the helicopter was conducting “routine flight operations” about 60 nautical miles off the coast.

One sailor who was rescued from the helicopter was stable on Wednesday, the Navy said.

Five sailors who were aboard the Lincoln at the time of the crash also were injured and were in stable condition on Wednesday, the Navy said.

The Navy did not say how those sailors were injured. Two were taken ashore for treatment, while the other three remained on the carrier and were treated for minor injuries, the Navy said.

In a statement on Facebook on Wednesday, Lincoln officials said the crash was a tragedy.

Military officials identified the helicopter that crashed as an MH-60S, a model that has been in use since 2002, according to the Naval Air Systems Command.

The 14,000-pound helicopter has a range of 245 nautical miles and can reach a top speed of 180 knots, according to the command. The Navy has more than 250 MH-60S helicopters in use, the command said.

MH-60S helicopters are used for an array of purposes, including “vertical replenishment, combat search and rescue, special warfare support and airborne mine countermeasures” according to Naval Technology, a website that reports on military equipment.