TEHRAN (Defapress) - Secretary of Iran Judiciary's Human Rights Council said that approach of political and instrumental use of human rights must be set aside by the Western countries.
News ID: 83893 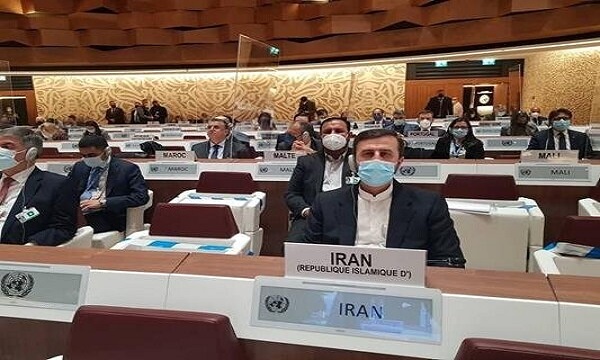 Speaking at a high-ranking meeting of the United Nations Human Rights Council (UNHRC) in Geneva on Monday, Kazem Gharibabadi, Deputy Judiciary Chief for International Affairs described positions of the Islamic Republic of Iran among members of the Council.

The principled policy of Islamic Republic of Iran in the field of human rights is based on protection and promotion of these rights for all walks of life in society, he said, adding, “Our firm belief in supporting and protecting human rights is deep-rooted both in our religious criteria and international commitments we have accepted.”

Strong religious faith and belief, fortified cultural infrastructures, authentic legal frameworks and also a principled approach to human rights and its protection constitute the main element of individual and social lifestyle in the Islamic Republic of Iran, Gharibabadi emphasized.

During the global coronavirus pandemic, while human rights defenders had targeted Iranian nation's access to equipment in the fight against COVID-19 disease, Islamic Republic of Iran relied on its indigenous knowledge and technology to provide some of the tool needed to combat the disease and provided technology of fighting COVID-19 available to other countries with generosity.

Stating that three branches of the government have used all their efforts and capacities to render quality services to people and support and promote their rights, Gharibabadi said, "In this regard, laws, policies as various plans have been approved and implemented especially in recent year. At the same time, Islamic Republic of Iran has made significant progresses in protecting human rights and, of course, has paid hefty financial costs especially in the fight against drugs and international trafficking gangs as well as hosting of millions of refugees.”

Criticizing the double-standard positions of human rights by some governments, Gharibabadi said, "While everyone talks about human rights and sometimes even mobilizes to support a criminal, political support, some deliberately and intentionally violate the rights of Iranian people.”

The United States is trampling any international norms, he underscored.

Emphasizing that sanctions have prevented access to essential medicines and prevented the transfer of humanitarian aid during natural disasters and coronavirus pandemic, he said, "The United States acts as a self-proclaimed global police force and is violating any international rights and norms. This illegal behavior is neither legitimate nor legal and should not be tolerated by the international community. Given the predictable and costly consequences of sanctions, they should be considered as a weapon and a tool of aggression. Unilateral economic and commercial coercion is contrary to the aims and objectives of human rights and, in fact, is the collective punishment of ordinary people and should be considered a crime against humanity.”

The Iranian judicial official further condemned the western countries for harboring the adversary MKO terrorists, saying that " out of the 17,000 martyrs assassinated in Iran, 12,000 people have been martyred by the members of the terror group."