TEHRAN (Defapress) - Russia has said it had test-launched its Sarmat intercontinental ballistic missile, which Vladimir Putin said would give Moscow’s enemies something to think about.
News ID: 84083 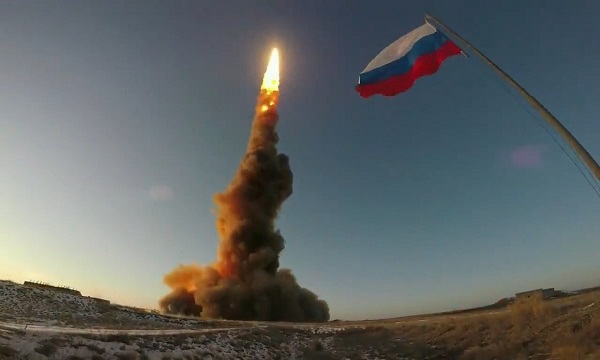 Russia’s Defense Ministry announced on Wednesday that the Sarmat missile, a long-awaited addition to the country’s nuclear arsenal, was fired for the first time from a silo launcher in Plesetsk State in the country’s northwest Arkhangelsk region at 1512 Moscow time (1212 GMT).

According to the ministry, the missile’s practice warheads hit designated targets in Kamchatka, nearly 6,000 km (3,700 miles) away in the Pacific.

Putin congratulated the army on the successful launch of the Sarmat in televised remarks, calling it “a big, significant event” for Russia’s defense industry.

“The new complex has the highest tactical and technical characteristics and is capable of overcoming all modern means of anti-missile defense. It has no analogues in the world and won’t have for a long time to come,” Putin said.

“This truly unique weapon will strengthen the combat potential of our armed forces, reliably ensure Russia’s security from external threats and provide food for thought for those who, in the heat of frenzied aggressive rhetoric, try to threaten our country.”

The Pentagon said on Wednesday Russia had properly notified it ahead of its test launch, adding it saw the test as routine and not a threat to the United States.

Russia is expected to deploy the Sarmat with 10 or more warheads on each missile, according to the US Congressional Research Service.

Since the start of the Ukraine war on February 24, the conflict has provoked a unanimous response from Western countries, which have imposed a long list of sanctions on Moscow.

Moscow has repeatedly warned NATO against sending more weapons and troops near Russia, and some NATO members have cautioned that such moves would drastically escalate tensions.