TEHRAN (Defapress) - The Secretary-General of the Lebanese Resistance movement Hezbollah has said that while the Israeli regime tried hard to sideline the Palestine issue new blood has been poured into the Palestinian body to remain a top issue.
News ID: 84092 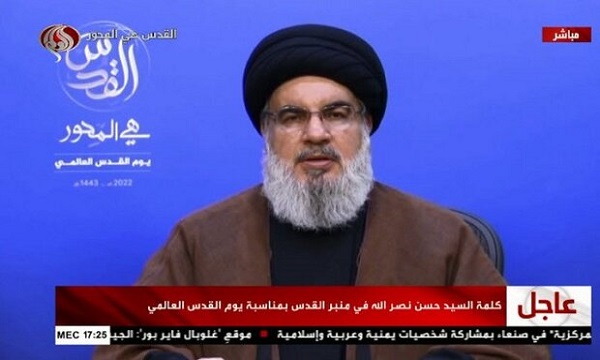 Speaking during the online meeting attended by different Resistance figures from across the region ahead of the International Quds Day on Tuesday titled “Unified Platform” event, Hassan Nasrallah said that the Israeli regime tried hard to sideline the Palestinian issue but Palestine has remained a top priority for the Islamic world.

Nasrallah underlined the importance of the call issued by the Leader of the Islamic Revolution in Iran Imam Ruhullah Al-Khomeini to mark Al-Quds International Day every last Friday of the Holy Month of Ramadan.

Hezbollah chief indicated that the enemies have bet on oblivion to eradicate the Palestinian, stressing that the axis of resistance prioritizes Al-Quds and suggesting that it must be called the “axis of Al-Quds”.

Nasrallah underscored that all the Umma must be concerned with the Palestinian cause, adding that Hezbollah will remain to assume its responsibilities in this regard.

For the sake of Al-Quds, powerful armies are being established, Sayyed Nasrallah said, adding that Gaza resistance is mighty sword defending Al-Quds.

Sayyed Nasrallah highlighted the epic operations launched by the Palestinian resistance against the Israelis, noting that they confirm their commitment to the full liberation of occupied Palestine.

Hezbollah Secretary General maintained that the economic sanctions imposed on Lebanon and a number of other countries aim at obliging the resistance forces to abandon the Palestinian cause, adding that steadfastness in face of the economic war is a basic part of the battle.

Sayyed Nasrallah stressed that the battle with the Zionist enemy will lead to an imminent victory, vowing again to pray at Al-Aqsa Mosque.

For his part, Hamas Chief Ismail Haniyeh indicated that the normalization deals and the Russian-Ukrainian war have enabled the Zionist entity to escalate its aggression on Al-Aqsa Mosque, vowing to defend the Holy Shrine and prevent the enemy carrying out its judaization scheme.

Head of Yemen’s ansarullah Movement Sayyed Abdul Malik Badreddine Al-Houthi reiterated his commitment to Al-Quds formula as announced by Sayyed Nasrallah, devoting all the Yemeni capabilities to reach this target.

It is worth noting that a number of resistance commanders and figures committed to the Palestinian cause also addressed the event that underlines the unity of the axis of resistance in face of the Zionist enemy.