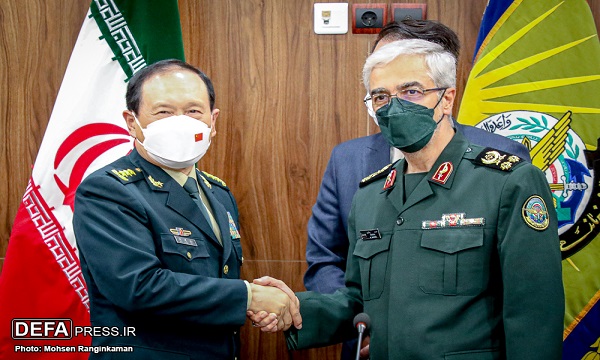 Chief of Staff of the Iranian Armed Forces Major General Mohammad Bagheri and visiting Chinese Defense Minister Wei Fenghe on Wednesday agreed to develop cooperation in the field of organizing military drills as well as exchanging experiences in the relevant field.

During the meeting, the two sides emphasized the need for the development of educational, military and security cooperation between armed forces of the two countries.

Relations between the armed forces of Iran and China have been developing in recent years, so that the two countries have so far held joint military drills in the Sea of Oman, General Bagheri said.

In meeting with Chinese Defense Minister, it was agreed to develop bilateral cooperation in the field of holding military exercises, exchange of experiences, training issues and other common fields between the two countries 'armed forces in order to provide better security for sovereignty of the two countries' territories, he added.