TEHRAN (Defapress) - The Leader of the Islamic Revolution Ayatollah Seyyed Ali Khamenei on Wednesday received the Iranian members of parliament for a meeting during which he commemorated the Liberation of Khorramshahr during 1980-1988 imposed war.
News ID: 84183 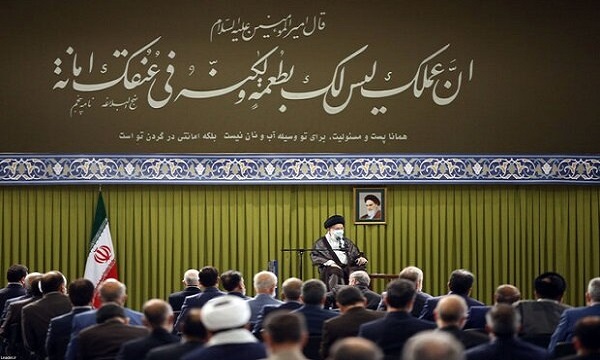 Following today's open session in the Iranian parliament, lawmakers went to meet with the Leader.

The meeting was held in Imam Khomeini Hussainia of Tehran.

Earlier today, Ghalibaf was reelected as Parliament speaker for the third consecutive year.

At the start of his remarks, the Leader of the Islamic Revolution pointed to the anniversary of the rataking of the city of Khorramshahr on May 24, 1982, from the Saddam Baath regime and said that the Liberation of Khorramshahr was a turning point that changed the course of the war.

Ayatollah Khamenei also told the lawmakers that the Liberation of Khorramshahr showed that "victory is possible in all the various fields in the country that you face, such as internal and external issues, as well as hardware and software issues."

"The liberation of Khorramshahr transformed a bitter situation into a sweet one. The Iranian nation was saved. This was due to their jihad, self-sacrifice, strong determination and having initiative. The spirit behind of all these virtues was sincerity and reliance on God," the Leader highlighted.

According to the website of the Leader "Khamenei.ir", he elsewhere said that "A religious, Islamic democracy is a new idea. We have brought this into the world’s political literature. This is what provokes the animosity of the top powers in the world against this truth and phenomenon."

Ayatollah Khamenei further pointed out that, "The slogans of the Revolution are beneficial to the country, despite what some profess that the Islamic Revolution creates problems for Iran. No, it is the other way around. The Revolution and paying attention to these ideals are cures for the country’s sufferings."