Westerners not hesitate to expand their influence everywhere

TEHRAN (Defapress) - Leader of the Islamic Revolution Ayatollah Seyyed Ali Khamenei said Sunday that, "Westerners are trying to expand NATO and they will not hesitate to expand their influence wherever they can."
News ID: 84259 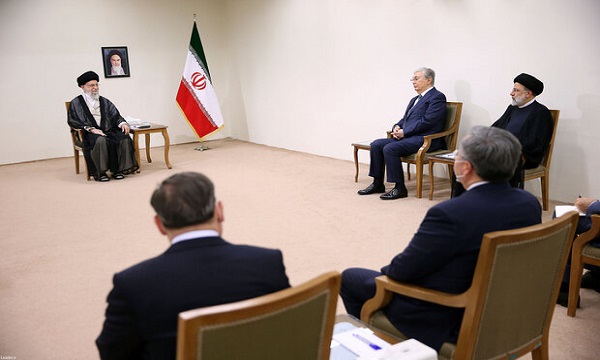 Kazakhstan's President Kassym-Jomart Tokayev and his entourage met with the Leader of the Islamic Revolution Ayatollah Seyyed Ali Khamenei.

In the meeting, the Leader pointed to the deep historical and cultural ties between Iran and Kazakhstan and stressed the need to further expand cooperation between the two countries in various fields, especially within the framework of regional cooperation.

As regards the Ukraine issue, Ayatollah Khamenei said that the main problem with Ukraine is that Westerners are trying to expand NATO and that they will not hesitate to expand their influence wherever they can.

The issues should be carefully monitored and looked into because Americans and Westerners are always trying to expand their influence in various regions, be it the East and West Asia, and to target the independence and sovereignty of other countries.

President Kassym-Jomart Tokayev, for his part, said that he had held very good negotiations with Mr. Raeisi, and the documents signed by the two sides could lay the ground for further expansion of relations between the two countries.

The President of Kazakhstan described the historical and cultural similarities between Iran and Kazakhstan as deep-rooted and welcomed the Leader's proposal to form a scientific committee on Farabi, the great Islamic philosopher who Ayatollah Khamenei said had origins in Kazakhstan.

He also expressed his views on regional issues such as the situation in Ukraine and explained his country's conditions after the failed coup attempt in January last year.

President Ebrahim Raeisi was also attending the Leader's meeting with the Kazakhstan delegation.

The visiting Kazkhistan president Kassym-Jomart Tokayev and his accompanying high-ranking delegation held a meeting with President Ebrahim Raeisi earlier on Sunday followed up by a joint press conference.

Iran and Kazakhstan signed 9 cooperation documents in the presence of both presidents.