End of US era in Latin America ‘approaching’

TEHRAN (Defapress) - The continuous serial political developments in Latin America indicate that countries of the region have become a major obstacle in the path of the policy of unilateralism by the United States.
News ID: 84279 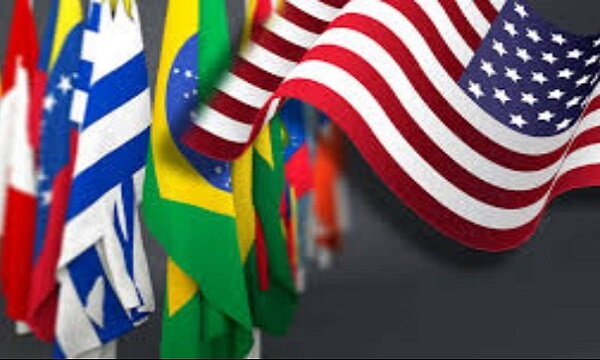 The continuous and serial political developments in Latin America indicate that countries of this region, which have always been considered the backyard of the United States, have become a major obstacle in the path of the policy of unilateralism by the United States.

Some series of developments are underway in Latin America that their significance and impacts on the global equation are no less than the Ukraine war and Taiwan conflict.

The decision was an important step in "benefiting" the Latin American country from "defense, trade and security cooperation" with the United States that now with the left-wing party assumed power in this country, “We should expect change of approach by the United States.”

The direct relationship between events similar to the results of the Colombian Presidential Election, which is associated with the downgrade of the US status in Latin America as well as its direct impact on limiting continuation of unilateralist policy by the United States, is an issue that has been turned into an important challenge for Washington. The significance of this issue becomes more apparent when special attention is paid to the costly strategy of the United States over the previous years to keep Latin American countries as Washington's backyard.

The results of Colombian Presidential Election indicate the fact that the United States has suffered a heavy political defeat on its own continent.

The development of Venezuela's strategic relationship with Iran, which has recently deepened and strengthened with the recent visit of Venezuelan President Nicola Maduro to Tehran, is also considered by Western political experts as another defeat for the United States.

Washington, which is deeply concerned about the decline of its power in Latin America, tried to form a new grouping in mid-June without inviting Nicaragua, Venezuela and Cuba to the Ninth Summit of Americas in Los Angeles.

The US move provoked widespread reactions that member states in the American and Caribbean Community (Celac) meeting in Argentina announced that the meeting would be held by countries that have not been invited by the US to the Summit. The 10 so-called “Alba Bloc” also issued a statement and condemned the expulsion and discriminatory behavior of the United States at the Ninth Summit of Americas in Los Angeles.

This collective move of Latin American countries taken against US unilateralism has been so widespread that “Foreign Policy” Magazine wrote in an article, “This year's meeting of the Organization of American Countries, after nearly three decades, could be a tombstone to show the decline of Washington's influence in the Latin America.”