TEHRAN (Defapress) - A delegation from the Taliban has arrived in Tehran to attend the seventh meeting of the High Border Commission between Iran and Afghanistan.
News ID: 84288 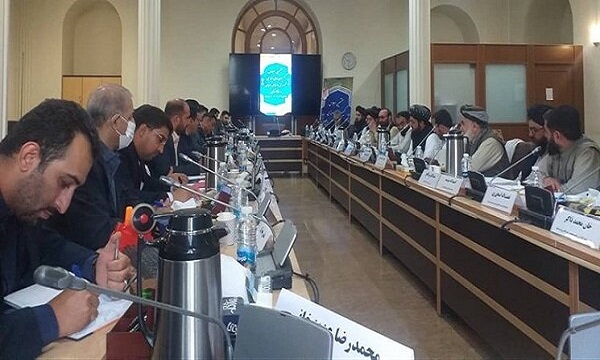 A delegation of the acting government of Afghanistan headed by Mawlawi Saadullah Baluch, head of the Security and Border Cooperation Department of the Ministry of Foreign Affairs of Taliban interim government, has arrived in Tehran to attend the seventh meeting of the High Border Commission between Iran and Afghanistan.

During the visit, Saadullah Baluch was accompanied by 14 individuals from different ministries and their meeting is scheduled to be hosted by Tehran and various border issues will be resolved between the two countries.

Earlier, an Iranian delegation, headed by Law Enforcement deputy commander Brigadier General Rezaei, met with the Afghan delegation in the border Iranain town of Taybad, and initial agreements had been reached to continue these meetings and resolve some border issues.

The existence of some border problems and greater coordination to fight drug and human trafficking, as well as joint combating the activities of illegal groups on the shared borders, are among the issues that are expected to be discussed at this meeting and future meetings to reach necessary agreements between Tehran and Kabul.

Armed thugs from Afghanistan attacked an Iranian border checkpoint and martyred a border guard. After the incident, in a statement on Wednesday, Iranian Foreign Ministry spokesman Nasser Kanani expressed his condolence and sympathy for the martyrdom of the Iranian border guard, Mohammad Sayad to his honorable family and all the border guards of the Islamic Republic of Iran.

The spokesman called on the Afghanistan rulers to punish the perpetrators and take measures to prevent repetition of such incidents.