TEHRAN (Defapress) - The Zionist forces continue to target the Gaza Strip with air attacks for a second day.
News ID: 84363 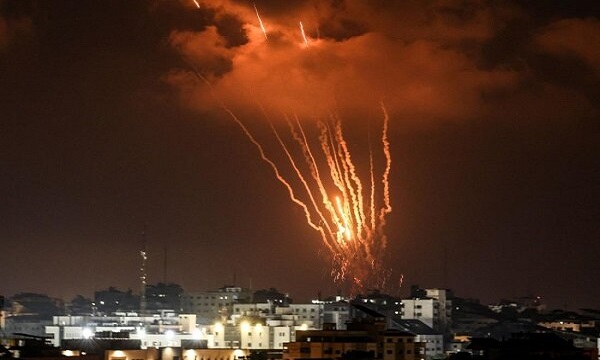 The Zionist regime's army launched brutal attacks on the Gaza Strip on Friday evening, killing a number of Palestinians, including a senior commander of the Islamic Jihad movement, and a five-year-old child.

The Islamic Jihad has fired more than 100 rockets toward the occupied territories after the Israeli regime assassinated one of the Palestinian resistance movement’s senior commanders during a massacre.

The movement called the retaliatory barrage only an “initial response” to the Israeli bloodbath that killed a number of Palestinians in the city of Rafah which is located in the southern part of the Tel Aviv-blockaded Gaza Strip.

The followings are the latest developments:

The Zionist Army Radio announced that two Zionist forces were injured in a rocket attack by the resistance groups on the Zionist settlement of Eshkol in the vicinity of the Gaza Strip.

Palestinian sources reported that sirens had been activated in Ashdod. These sources say that the resistance forces have used drones to attack.

According to reports, sirens have been activated in all the Zionist settlements around Gaza. Hebrew sources say that a fire broke out after the rocket hit a factory in Eshkol.

An Israeli air attack has targeted and destroyed a family home west of Gaza City.

According to a report by Al Jazeera, Nadia Shamallakh, 65, said that her family of 10 were having breakfast when their neighbours came running to tell them to evacuate.

“No sooner had we left, the house and our crops all got destroyed. Me and three of my children had to go to the hospital,” she said.

“We are farmers. There are no fighters in the area.”

Palestinian sources reported that the Israeli army has targeted the "Sheikh Ijlin" area in the south of the Gaza Strip.

Shahab news reported that the Zionist regime targeted a residential house in this area.

Al Jazeera Mubasher says that a three-story house was completely destroyed in the attack of the Zionist regime in the "Sheikh Ijlin" area.

Simultaneously, Channel 13 of the Zionist regime reported that two settlers were injured after a rocket hit the Zionist settlements around Gaza.

Hebrew sources reported that sirens were activated in the Zionist settlements around the Gaza Strip and east of Tel Aviv. The media say that at least 10 explosions were heard around Tel Aviv.

Some news sources said that four rockets were fired at Ben Gurion Airport in Tel Aviv.

The Islamic Jihad military branch announced that it targeted Tel Aviv, Ben Gurion Airport and other places in occupied Palestine with 60 missiles and rockets.

The Israeli regime said it is preparing for a “week of operations” against Palestinian resistance groups in the Gaza Strip.

The Zionist regime's army spokesman Ran Kochav was quoted by  Zionist media as saying that there are no negotiations for a truce and that the offensive on Gaza may take at least one week.

An official in the Islamic Jihad movement said there has been no talk of calm or mediation “for the moment”.

The unnamed official was quoted by a local Palestinian news agency as saying that the situation “is heading for an escalation”.

Palestinian sources reported that the fighters of the Zionist regime targeted a position of the resistance groups in the north of the Gaza Strip.

The Zionist Army claimed that if the Palestinian Islamic Resistance Movement (Hamas) supports the Islamic Jihad, it will expand the scope of its operations against Gaza.

At least two Palestinians have been killed and several others injured when the Israeli military carried out new airstrikes against the Gaza Strip, as the Tel Aviv regime continues its acts of aggression against the blockaded Palestinian coastal enclave.

Palestinian media outlets reported that an Israeli airstrike near Khan Younis in the southern Gaza Strip killed at least one person.

At least two others were wounded in the strike, the reports added.

Meanwhile, another airstrike targeted a motorcyclist in the Shuja'iyya neighborhood of Gaza City, local media said.

According to the latest reports, sirens were sounded in Israeli settlements near Gaza.

Following the continuous rocket attacks of the Palestinian resistance on Israel, the streets of the Zionist settlement of Sderot have been evacuated.

The Zionist army issued a statement on Saturday asking all the settlers around Gaza to remain inside the shelters.

The Zionist army has arrested 19 members of the Islamic Jihad Movement in different areas of the West Bank.

Israel will continue the military operation in the Gaza Strip until all its goals are achieved, Israeli War Minister Benny Gantz told his US counterpart, Lloyd Austin.

According to the Zionist regime's War Ministry, Benny Gantz talked with US Defense Secretary Lloyd Austin and informed him about the Breaking Dawn operation.