TEHRAN (Defapress) - Praising Palestinian people for their resistance, Secretary-General of Lebanon’s Hezbollah Resistance Movement said that Tel Aviv asked for a ceasefire since it could no longer withstand Resistance's rockets.
News ID: 84364 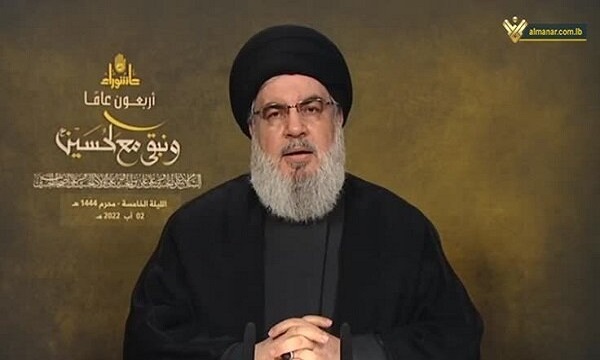 Addressing Hezbollah’s Ashura ceremony in Beirut’s Dahiyeh on Sunday night, Nasrallah stressed that the Israeli enemy was very clear that it wanted to reach a ceasefire because it could not take any more missiles from Gaza.

Sayyed Hassan Nasrallah also hailed the brave people of Palestine who confronted the Israeli aggression on Gaza, underling the steadfastness of the Palestinian civilians in the besieged strip.

He said that this battle confirms again that the Resistance movements in Palestine, Lebanon, or any other country can confront the Israeli military power and maintain the balance of deterrence in face of the enemy.

“If you advance in the battle against this monstrous enemy, it backs off; however, if you retreat, it attacks you,” Hezbollah chief said.

In the end, Nasrallah remembered the Gaza martyrs, asking the God Almighty to grant the injured a speedy recovery.