TEHRAN (defapress) – Parliament Speaker Ali Larijani said a huge gap had appeared between the US and its European allies on Iran’s nuclear issue.
News ID: 66831 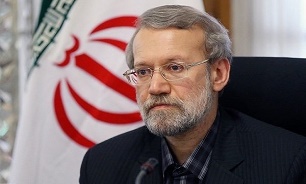 Addressing a gathering of retired IRGC clerics in Qom on Thursday, Larijnai, referring to international developments, said "there have been developments at the international scene which are different from the past year ones. Following the nuclear deal, the Islamic Republic of Iran has fulfilled all its obligations while the other party has remained partially committed to the agreement.”

"When Donald Trump took office, he began to take measures to ruin the international deal though his allies warned him that collapse of the agreement would be at the expense of the United States,” he noted.

He added that the Zionist regime and Saudi Arabia were seeking to provoke the United States against the Islamic Republic of Iran; "the condition, of course, has revealed the fact that it is the US, and not Iran, who is after creating obstacles and barriers.”

Parliament Speaker later stressed that Vladimir Putin had recently backed Iran and expressed his opposition to renegotiation of the Joint Comprehensive Plan of Action (JCPOA). "Similar to China, the Russian President also emphasized that the N-deal was not related to security issues,” highlighted the official recalling that the three European countries involved the nuclear deal are still standing by it.

He stated that the United States and its European allies had a crackdown on Iran’s nuclear issue, which was not of little importance since the European sides had announced their adherence to the nuclear deal at a joint commission.

The Islamic Republic of Iran managed to bring the achievement to the fore despite all funds and facilities used by Saudis and Zionists in opposing Iran.

Larijani argued that hostility of Saudis with Iran was previously concealed, but they are now openly hostile to Iran; "at the Riyadh summit, Donald Trump gained a lot of money through Saudi Arabia and made certain commitments to Saudi Arabia on Iran. At the beginning of the Islamic Revolution, Saudi Arabia also provoked Saddam Hussein against Iran and its current reasons for the hostility with Iran are lame excuses.”

He emphasized that the Zionist regime and Saudi Arabia had joined hands in enmity against Iran asserting "in the international and regional issues, these two movements are conducting measures against Iran, and the Zionist regime is now after supporting Jabhat al-Nusra following humiliating defeat suffered by the ISIL.”

The official, while stressing that Iran had resolved many of the crises and marked a source of security for regional people, said even Europeans were aware of Iran’s positive role in creating security.

"ISIL is completely disappearing in Iraq and Syria,” noted Iran’s Parliament Speaker recalling that, six years ago, Iran was the only country on the side of Syria while now even European countries are seeking a compromise on the Syrian issue.

At another part of his remarks, Ali Larijani touched upon domestic issues saying "major problems in the country are economic ones as unemployment has raised serious concerns. Factories need to boom in order to create jobs. Of course, the trend is positive though it needs to be accelerated.”

He said issues related to virtual and cyber spaces had to be addressed with sensitivity, precision and correct strategy in order to prevent social harm. "It should be noted, however, that social damage is also rooted in economic issues.”