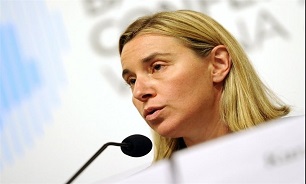 "President Trump's announcement on Jerusalem (al-Quds) has a very worrying potential impact. It is a very fragile context and the announcement has the potential to send us backwards to even darker times than the ones we're already living in," Federica Mogherini told a press conference in Brussels, Daily Sabah reported.

"The European Union has a clear and united position. We believe the only realistic solution to the conflict between Israel and Palestine is based on two states and with Jerusalem (al-Quds) as the capital of both," she said.

The issue is likely to dominate a breakfast meeting between Israeli Prime Minister Benjamin Netanyahu and EU foreign ministers on Monday, she added.

US President Donald Trump officially declared the disputed city of al-Quds Israel's capital, despite warnings from around the world that the measure risks triggering a fresh wave of violence in the Middle East.