There is no Israel at all, no capital is defined for it: Bagheri

TEHRAN (defapress) – Chief of Staff of the Armed Forces Major General Mohammad Bagheri, condemning US President Trump's decision in recognition of Al-Quds as capital of the Zionist regime, said the path to the liberation of Quds will continue more stronger than ever.
News ID: 67315 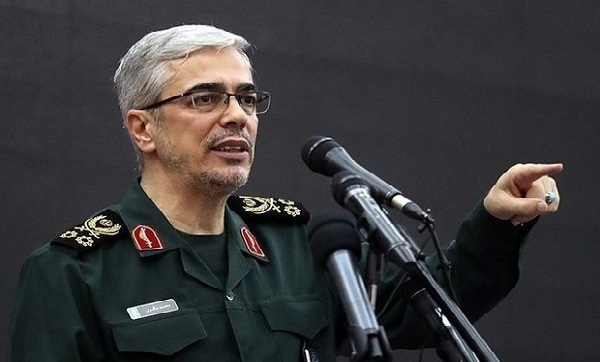 In the statement issued on Thursday, Bagheri said Quds belongs to the Palestine and the Islamic world; he reiterated that Muslims will never allow the holy place's separation from the Islamic world and the hegemonic power of the US will be disappointed knowing that unity of the Islamic world will defeat such futile acts and will make the Zionist regime closer to annihilation.

He said that the US decision was a flagrant violation of the rights of the oppressed Palestinian people and international resolutions, adding the "United States and the Zionist regime would be responsible for any tension and conflict in future."

Today, the leaders of the Islamic world must take any action to nip in the bud any plot against Palestine and with taking unilateral policies and strategies, confront the new conspiracies of the US and the Israeli regime against the Quds and Palestine, he noted.

"We believe that there is no such thing as Israel at all, therefore no capital is defined for it," Bagheri added.

Noting that the history will judge about Arab and Islamic states' silence or participation with other Muslim nations against the Zionist regime, he stressed that they are undergoing a historical test.

He said that unwise decision of Trump is clear violation of Palestinian rights and contrary to international laws and added that responsibility for any tension and conflict is on the shoulder of the US and the Zionist regime.