TEHRAN (defapress)- The 49th fleet of warships of the Iranian Navy returned to Bandar Abbas in Southern Iran on Sunday morning after completing 67 days of sea navigation in free waters.
News ID: 67965 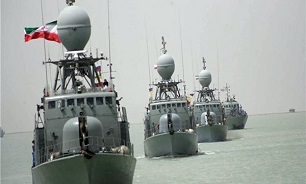 The 49th flotilla of the Navy returned to the country after 67 days of sailing and fulfilling missions and participating in relief and rescue operations which was held in Bangladesh in the presence of 33 countries of world.

The Iranian Navy's flotilla participated in Search and Rescue (SAR) naval drills participated by warships from 32 other countries comprising 23 member-states and nine observer members in Bangladesh.

“Our participation at the world’s biggest SAR drill and our continuous presence on the high seas of the world demonstrate the might and strength of our dear country,” asserted Commodore Reza Ghorbani, in charge of the flotilla.

“It shows our country’s greatness that despite all unjust sanctions we have kept our effective presence on waters in place and have effectively contributed on the international stage,” the commander added.

In a relevant development earlier, the Bangladeshi Navy official at the port of Port of Chittagong thanked the Iranian squadron for participating at the drill.

“We believe that Iran is a big country and we consider Iran as a powerful country and hence we are willing to have reciprocal and continuous ties with Iran,” the Bangladeshi commander said.

Concurrent with flotilla 49th leaving Iranian waters for Bangladeshi waters, Iran's Navy Commander Rear Admiral Hossein Khanzadi said, “The arrogant powers are pursuing their colonialist influence in other countries when they give relief services, but Iran's approach in helping other countries are humanitarian and based on religious teachings."

An Iranian high-level delegation, headed by Second Flotilla Admiral Bahram Askarian is in Bangladesh. The delegation is representing Iran at Indian Ocean Naval Symposium (IONS), presenting agenda for IONS 2018 that will be hosted by Iran.

In recent years, Iran’s naval forces have increased their presence in high seas to secure naval routes and protect merchant vessels and oil tankers against pirates.

In line with international efforts to combat piracy, the Iranian Navy has also been conducting anti-piracy patrols in the Gulf of Aden to safeguard the vessels involved in maritime trade, especially the ships and oil tankers owned or leased by Iran.