ISIS is the leverage of America against Iran, Russia and China

"The troops of our country are full of aristocratic movements in the region," said the head of the Center for Strategic Studies, arguing that ISIS leverage US pressure on Iran, Russia and China.
News ID: 68984 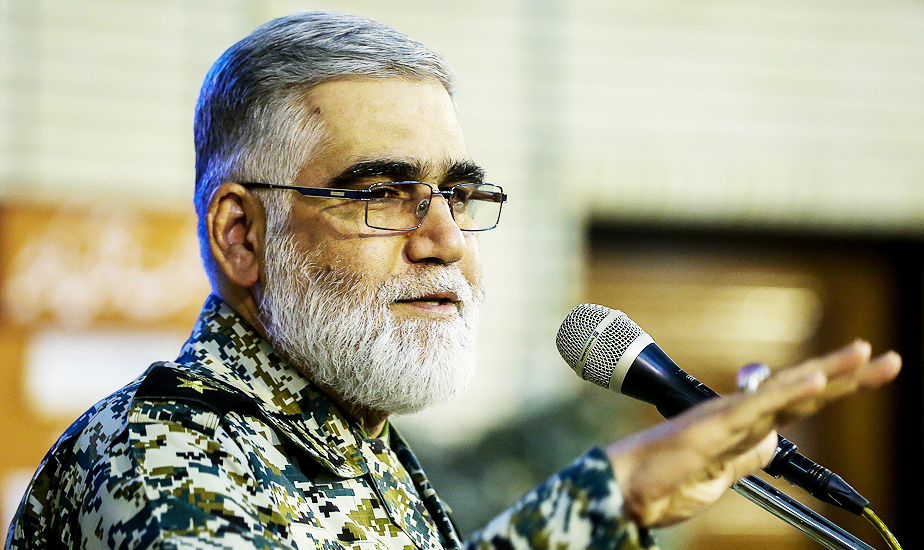 According to Defapress of Arak, General Brigadier, "Ahmad Reza Pourdastan, head of the Center for tactical Studies of the Army of the Islamic Republic of Iran at the ritual of commemorating the martyrs held in the attendance of Martyr Hajj's uncle and a group of martyrs and emperors in the mosque of Imam al-Mahdi (AS) in Arak, Referring to a narration from Ali ibn Abi Talib (AS) that he would pass up the enemy's hatred in calm, he added: "In such a position, the enemy wants to move toward, so that he will abandon and slam from behind." In such a situation, it should be considerate and should not be at peace to this enemy, such an enemy is seeking such a new deception with such actions.

He stated that before the victory of the Islamic Revolution, the world was lined as a center, and the United States and the Soviet Union were two poles of power conquered by each and every country, saying that the Soviet Union, the Eastern community and the United States, Western Europe and some The countries of the area were dominated and prejudiced by Iran, and Iran was the most significant American moon in the area, which gave it many benefits.

Pourdastan stated: Iran was in the north of the Persian Gulf, the Strait of Hormuz and the Oman Sea, and the United States could control the oil path through Iran, preventing the transport of oil to any country that excess its needs and its economy exceeded its He took turns. Our country was a Soviet fellow citizen, and the United States deployed all its radar and spy systems on the northern border of Iran and controlled and monitored everything that was going on in the Soviet Union.

The head of the Center for planned Studies at the Army added: "Iran was the market for American crop and gendarmerie in the area, and it was the duty of the United States to arrange in a line the countries of the area." Iran was the front of the front of NATO against Warsaw. The Soviets were keen on free waters as the tsar, and their only way was to Iran, and they were trying to do it through Iran, but the American plan was that if the Red Army wanted to go through Iran Getting water out of the reach of the Iranian army will stop them until the US military and NATO troops have escaped from the Indian Ocean and left off in Konarak and Chabahar, and Iran will be the scene of the disagreement.

According to him, when the revolution was won, these reimbursement were taken from them, but their main anxiety was that the Islamic Revolution of Iran created itself with a new literature. The hostility of America to us and our antagonism with them is a rooted hostility, it's not an obvious antagonism to be resolved by several meetings and meetings.

Pourdastan emphasize: the revolution brought with it the writing of autonomy, freedom and authority of the Faqih, spiritual democracy and religious government. They knew that this literature did not remain within the boundaries of Iran and exaggerated the region, so they tried to overthrow this system. From the very first day of the Islamic Revolution, on January 23rd, 1977, Iran was barred from economic sanctions, and this happened when we were 100% needy.

He added: "They closed all economic and commercial strips and isolated us, and instantaneously launched a massive wave of assassinations and bombings, and carried out blind and intelligent assassinations but did not come to a conclusion. Therefore, widespread unrest in the northwest the start and 18 months of our country concerned a significant part of our forces in this field.

Pourdastan: the next enemy of the enemy, said that Saddam was rewarded for suppressing the Khouzestan annexed revolution to the country's soil, subsequent the futile actions of the past and inciting Saddam to assault Iran.

In telling the condition in Iran and Iraq, he explained: "Saddam Hussein attacked Iran on September 21, 1979, when we just revolted and rebuilt ourselves, we were in a boycott, and all economic trails were closed to us. And a large part of the armed forces were involved in counter-revolutionary move violently. In contrast, the Iraqi Army had 12 armies and 45 independent teams armed with guns and more than 50,000 Soviet armed forces in Iraq. In the war with Iraq, the arrogance of the East and the West was sustain by each other, and most of the Arab countries also supplied financial, human and apparatus to Saddam.

The head of the Center for planned Studies of the Army stated: "Nevertheless, in light of the leadership of the Imam, the give up and sacrifice of the warriors and the support of the people against the enemies, we have achieved victory certainly, one of the components of Iran's power is the presence of the people on the sight."

Pourdastan referred: to the studies of US futures institutions and said that it was true that the eastern power pole was gone but a new extremity is in the making, and if the United States did not deal with it, it would be difficult. This is the new pole of the Islamic world that is created by Shiite and Sunni unity, and the revolution of the people of Iran is the foundation for the creation of this new pole.

He said: that the Americans considered software and hardware measures to prevent the formation of this power pole. In the war, Michael Cranet, the deputy director of the CIA, investigated the Shi'a strong points with the help of experts in order to define the method of knocking Shi'a, and determined how to distance between Shiites, on the other hand, with the support of Saudi Arabia, Wahhabi schools in Islamic countries Boko Haram and the like are the result of the teaching of these schools.

Pourdastan added: that they also came to the scene in the hard-line fighting to stop the formation of the pole of power of the Islamic world. They were looking for a reason to attend the region. Accordingly, the spy agencies wrote the September 11 draft, and Saudi Arabia provided money and terrorists, thus giving the United States an reason to enter the area.

According to him, America's aim of being in Western Asia was not an invasion of Iraq and Afghanistan; in fact, they came to the area with 180,000 troops, several hundred aircraft and a variety of UAVs and superior military tackle, but eventually they realized that in The silhouette of intelligent and anti-Semitic leadership, and despite the religious people, the Provincial Council and the armed forces prepared in Iran as the mechanism of the country's power, cannot attack Iran, and actually stood 14 years behind our borders to attack, but eventually stop Longer legs left the area. In fact, they could not carry out their plans, and this is the product of Iranian power, derived from the blood of the martyr.

He said: that the strategy that is being implemented today is a hybrid war; they have all the capacities, including political capacities soft, semi-hard, space Social and cybercrime to deal with Iran.

Pourdastan emphasized: that in this area all the nation must enter and there is an inclusive defense here, added: "The enemy is very interested in connecting us in the field of terrorist groups and Takfiri." In 1993, within a short phase of time, ISIL crossed the borders of Iran by crossing its Iraqi borders and straddling Iran's borders, insightful forces in the country, and when it arrived, these intruders began bombing and elimination, and the ground To prepare for ISIS's successful entry, but our harsh forces did not allow them. The Sunni and Shiite scholars gave fatwa, and then the Iraqi people rose and ISIL was forced to retreat, today we have a very poor foot in ISIL in Diyala, which is their supporters.

The head of the Center for tactical Studies of the Army said: ISILs that were driven from Iraq and Syria were transferred to Jordan and Afghanistan, and now there are nearly 7,000 ISIs in Afghanistan, on the one hand, Wahhabi schools continuously inject ISIS into new forces and A number of Taliban have pledged allegiance to IS, and now there are three ISIL-controlled provinces in Afghanistan. ISIS leverages US pressure on us, Russia and China.

He said: that some of the intransigent countries in the region are also involved in bringing this threat to our borders, adding: "Fortunately, our military and law enforcement are at their glory."

Pourdastan said: that the enemy has invested heavily in the soft war, saying that the other field that we are involved with the enemy and that the Iranian nation should have a special interest in is a soft war. The soft war through cyberspace is drawn into our privacy rooms and we have to be careful.

He no longer described the enemy's attack as an economic or semi-hard war, saying: "The enemy wants sanctions to go among people and the dominion."

Pourdastan added: "Another area is bioterrorism, today they do not send ISILs with suicide vests, and they infect ISIL soldiers with various microorganisms and enter the country. These are the things that the enemy uses in the combined battle against us, and we must pursue the commandments and commands of the commander-in-chief to deal with these enemy attacks.

He emphasized: that anyone who moves in the non-direction of the region would be misleading, believed that the victory and health of the country would be considered by the Supreme Leader, and added: "What made us stand up to haughtiness in these years, A blessing of Imam and leadership. The root of many of the problems that survive in the country is the elimination of some officials from these events.

Purdistan emphasized: the need for the trusteeship of managers and officials and added: "Currently, the Achilles heel of our country is an economy and the enemy has invested heavily on this point." They boycotted us at the starting of the revolution, throughout the Obama era, toughened the sanctions and crippled their names, and at the time of the Trump, sanctions became harder and called the sanctions a mother.

He added: careful the only solution to using this strategy to be an elastic economy and said: "We need to reduce dependency and boost domestic production and save on all costs. In fact, boiling is necessary in this area.

The head of the Center for tactical Studies of the Army said: "The youth must know that the flag has been handed over to them, but it is hard to steal." For banners, they must be vision and endurance, though our youth have shown that they are worthy flagships. The likes of martyr Hajj in the scientific, technical, and military pastures and other fields showed that they could.

Purdistan emphasizes that our armed forces are in good condition and all movements are monitored on the land, air and sea outside the region, and we know the details of their paraphernalia and their movements, adding that their behavior is well-known and well-known. And analyzing the necessary defense capabilities in agreement with these analyzes.

He said: that they would be able to use the experiences of the Sacred Defense and the experience of the Iraqi and Syrian wars, saying that the armed forces of Iran would not be surprised and that Iran's military and law enforcement forces in the domestic and foreign arenas had a very high power to show the power of the system. Defend the authority of the system.

At the end of the ceremony, the martyr Yazidi and martyr Hojaji families were appreciated.