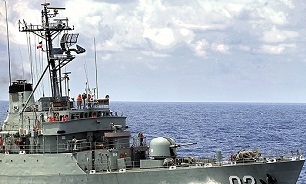 TEHRAN (Defapress)- "We should have joint ground, air and naval drills," Rear Admiral Sayyari said in a meeting with Chief of Naval Staff of Pakistan Navy Admiral Zafar Mahmood Abbasi on the sidelines of the Indian Ocean Naval Symposium (IONS) conference in Tehran on Tuesday.

Admiral Abbasi, for his part, stressed that the strategic situation of Iran and Pakistan necessitates further contacts and cooperation between the two countries, expressing the hope that such bilateral relations would broaden to the highest level.

During the meeting, he called for holding joint military drills between the two countries.

Yamamura, for his part, expressed the hope that military ties between Tehran and Tokyo would further expand, noting, "Certainly, we should take long strides in this regard."

Iranian and Pakistani Navies held joint military drills in the Southern waters of the Sea of Oman in 2017.
"Iran’s Jamaran destroyer was joined by a second missile-launch warship and a helicopter along with Pakistan’s fleet, including Tipu Sultan destroyer and its entourage in a joint drill in the Sea of Oman," Commander of First Naval Zone Rear Admiral Hossein Azad told reporters at the time.

He said that the drill exercised airlifting, navy transportation, vertical exchanges, and host of other operations.

Iran-Pakistan fleet exchanges goes back to 2014 when two countries received navy fleets with messages of peace and friendship.