The head of the Research Institute of Cultural Heritage and Tourism (RICHT) said the Iranians would become the largest cultural lobby in the world in the next one or two decades.
News ID: 70650 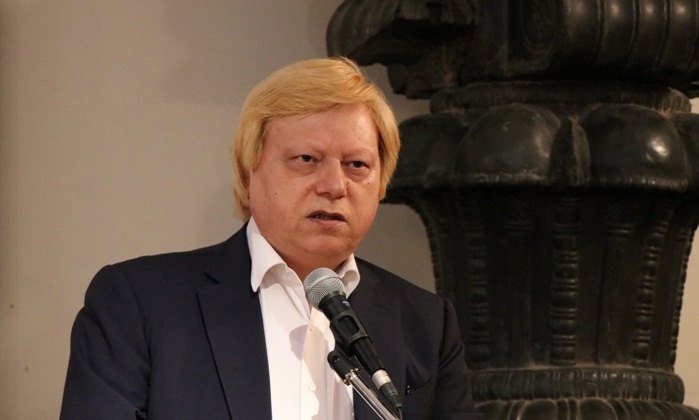 TEHRAN (Defapress)-Unlike the Zionist lobby they would need no conspiracy and definition of common interests rather the lobby is totally natural and effective in bringing Iran out of the world isolation in cultural dimension, Seyed Mohammad Beheshti was quoted by the Public Relations Office of the Research Institute of Cultural Heritage and Tourism in his address at the 11th meeting dubbed “Where Is Iran, Who Is the Iranian” which was held at the Planning and Budget Organization.

He considered as effective the community of the Iranian immigrants in bringing Iran out of the world isolation in terms of cultural dimension and regardless of political and economic discussions, and said: “This community, despite having independent existence, has attachment to the homeland and it is not indifferent to it and could serve as a bridge for the reestablishment of global interactions.”

He went on to refer to the Alborz Mountains as barrier to the movement of clouds from the Caspian Sea towards the Iranian plateau, and said: “We consider the Central and the Lut deserts as the two stigmas in our homeland and the evidence of this is our treatment of this land over the past 100 years.”

He said major development projects have been in line with finding fault with Iran such as giant projects like dam building over the Karun and Dez rivers or Koohrang tunnel and so on which all have been efforts to correct this land.

“We do not recognize our homeland as a unified and integrated entity and have no sound perception of this land,' he said.

Defining the economy as a collection of resources that provide an optimum product, he said when something becomes a single entity, in fact all the components together find a new aspect and provide optimum condition.

Beheshti stressed that the single entity has a single cause and pointed to the existence of the two huge continents on the Planet Earth in about 600 million years ago and said the movement of these two continents has caused the transformation of the earth because of which today there are several continents and even India has been separated from South Africa and attached to Asia and due to its pressure on the Asian continent the Himalayan Mountains have come into existence.

Saying that Iran too had been composed of three pieces that were compressed naturally and constantly by the movements and pressures of other layers, including the Eurasia and the Arabian Peninsula, adding that Iran is compressed about 23 to 30 mm per year which reduces its span but adds to its height.

Pointing out that Iran is located in the middle of the world, Beheshti said: “By looking at history we see that always in the main assaults in the world, Iran has been on the pathway, and for this reason, for example, Alexander had to cross Iran in order to reach the West, however, with regard to the situation of Iran, conditions were provided that when Alexander crosses Iran he was accused by his commanders of being an Iranian.

He added: “The Central Desert slows down the speed so much that people entering this land would be affected by our cultural digestion.”

He went on to say that when the Arabs reached Khorasan, the Abbasid Caliphate was formed, a caliphate of the caliphs which was turned Iranian.

Elsewhere in his remarks Beheshti referring to the Mongol invasion of Iran, and said: “When the Mongols arrived in Tabriz, they decided to remain in that land and were forced to let the Iranians take control of administration of the affairs.”

He added: “The Mongols invaded Iran in 609, and Soltaniyeh was built in 709, while in a hectare of decorations under the ceiling of the building, there is not a single mention of the Mongols which shows how the Mongols passed through the Iranian digestion.”

Referring to the existence of natural unity along with the natural diversity in Iran, he said the integrity existing in this land strengthens the relation between diversity and unity and each reinforced the other one.

As for the continuity of civilizational periods in Iran, he said: “Egypt is a very ancient country, but the ancient Egypt (the pharaohs) was almost cut off by Cambyses, and until the Fatimid period (about a thousand years later), and its afterwards, we see no brilliant civilization in that land.”

He further continued by saying that the ancient Greek civilization collapsed after the invasion of the Macedonian Philip (Alexander’s father) whereas in Iran the continuity of civilizational periods could be observed up to the Qajar era.

The head of the Research Institute of Cultural Heritage and Tourism while emphasizing the existence of a cultural unit in Iran, said: “For this reason, the Shahnameh is respected by all the Iranians and they give the names mentioned in the Shahnameh to their children, they know their stories and generalize the geography of the Shahnameh with their own geography.”

Beheshti referred to the Persian language and Nowruz ceremonies as the signs of cultural unity and said: “Wherever Nowruz is celebrated, the Shahnameh is respected or the Persian poetry is composed, that place is Iran (either Iran itself or under the influence of Iran).

Saying that there are 12,000 poets in Bosnia who compose Persian poems, he referred to the influence of Iranian culture in that country.

Referring to the common origins of the Kurds and the Azeri, he added: 'The origin of both these people is the Medes. In fact, the material that inhabited the plains was Azeri and the inhabitants of the mountains, Kurds, and because of different positions and roles, they have different characteristics are.

“History shows that whenever Iran has been involved in global interactions, it has been a thriving economic and cultural period, but with the decline of those interactions, we have been stricken by cultural depression and because of isolation we remain unaware of world events.”

He added: “During the Safavid period, there is still a desire for global interaction in the Iranians and Shah Abbas, even for the development of global communication, makes many caravansaries but unaware of the fact that global interactions at that time was no longer through land, but rather via sea.”

Referring to the migration of over 7 million Iranians in the contemporary era, the head of the Research Institute of Cultural Heritage and Tourism said most of the Iranian immigrants have gone to the most important countries in the world.
Comparing the Iranian immigrants with other societies, he said the Iranian community loses its specifications and its attachment to his homeland far later than other communities citing as an example the Persians in India who, after a thousand years, are still attached to their homeland.

He predicted that the Iranians will be the largest cultural lobby in the next in the next one or two decades, a lobby that unlike the Zionist lobby would be needless of conspiracy and definition of common interests, a lobby which is totally natural and would be effective in bringing Iran out of the world isolation in cultural terms.

Referring to Iran moving very fast towards a critical water condition, he criticized the project for water transfer from the Sea of Oman to Kerman or Khorasan and said the ecosystem would face such mechanisms with defeat.

Stressing that many fundamental revisions are needed in this regard, he said the nation-state should make the revision and every individual should rethink his own performance.