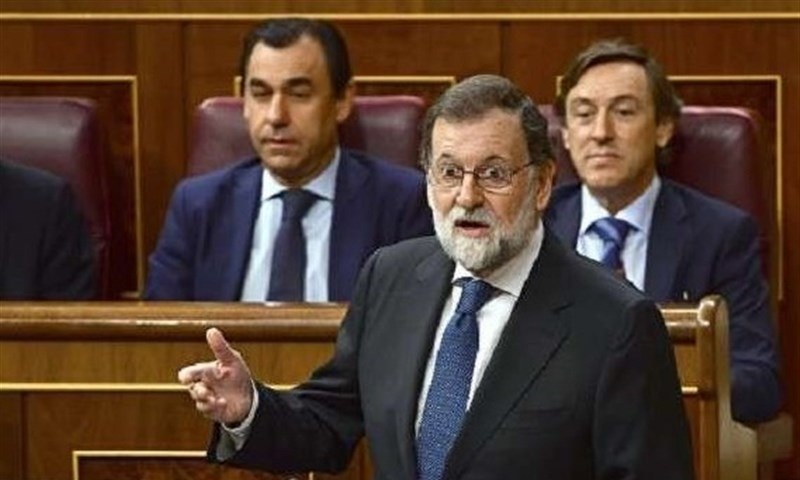 TEHRAN (Defapress) - After an acrimonious campaign that saw mystery videos released attacking both candidates in turn, 3,082 delegates will be casting their ballot in Madrid for the successor of Rajoy, who spoke for the last time as PP leader on Friday.

In a long, emotional speech, the 63-year-old asked PP members to "be responsible in carrying out your duties".

The delegates have a choice between Saenz de Santamaria, 47, who for six-and-a-half years was deputy prime minister, and Casado, a lawmaker who has promised "hope" with a generational revamp of the party and a step further to the political right.

Both were voted through a first round of unprecedented primaries at the PP.

Saturday's victor could become Spain's next prime minister if the PP wins general elections planned for 2020 at the latest, AFP reported.

She doesn't think the party needs to be revamped and believes she is most capable of defeating Pedro Sanchez, the current Socialist prime minister who ousted Rajoy with a parliamentary no-confidence vote.

"I have energy, I want it and I have experience," she told a campaign meeting.

"Pedro Sanchez is flying a Boeing 747, and he doesn't even have the experience to pilot a light aircraft," she said of the centre-left opponent.

On the other side is Casado, who has criticized his rival's management of the separatist crisis in Catalonia when she was in charge of relations between Madrid and regions.

He has taken a hardline stance on Catalonia, calling for the addition of offences such as illegally calling a referendum to the criminal code to boost Spain's legal response to the secession threat.

"Dialogue doesn't work with those who want to break the law," he said this week.

Casado is also against depenalising euthanasia as promoted by the Socialist government and wants to lower income and corporation taxes.

The winner will have to breathe new life into a party which between 2011 general elections, when Rajoy won an absolute majority, and the last polls in 2016 has lost three million voters.

Many have migrated to Ciudadanos, a centre-right party, angry over the series of corruption scandals that hit the PP in the past years.

Jose Pablo Ferrandiz, lead researcher at polling company Metroscopia, believes both Saenz de Santamaria and Casado will find it "very difficult to attract those who went to Ciudadanos".

The PP, which still holds most seats in parliament even if it has lost its absolute majority, will have to rapidly prepare for municipal, regional and European elections in May 2019.

And then further ahead, the party will be striving to re-take power from the Socialists.