Russian Media: S. Arabia Spending Billions of Dollars to Keep US in Syria

A leading Russian newspaper reported that the US was on the verge of a pull-out from Syria but continued to keep its military build-up in the country after Saudi Arabia undertook to finance their stay with multibillion-dollar budget.
News ID: 71907 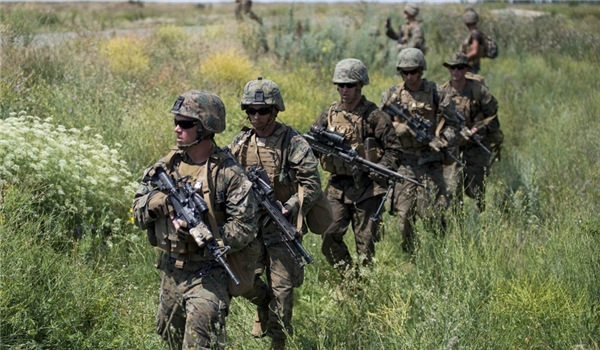 TEHRAN (Defapress)_The Russian-language Svobodnaya Pressa daily said Riyadh and Washington have not yet worked out the timeline for the budgeting, but Saudi Arabia has, though unwillinglly, taken up to provide for the multibillion dollar financing.

The report said Saudi Arabia was unwilling to make the spending despite Washington's warnings about its pullout, but it conceded after Trump used its options to pressure Saudi Arabia that include Riyadh's fears of the collapse of anti-Assad coalition after a US withdrawal.

According to the report, the Saudi spending might entail deployment of thousands of US troops in Syria.

Last week, US President Donald Trump praised Washington's cancellation of $230mln in funding for stabilization in war-torn Syria, stating that let "other rich countries" pay it, while the US spends its money on its military and allies.

The US officially ended support for stabilization projects in Syria on Friday. The $230mln worth of funding had been frozen for months before that however, after House forbid any funding for government-controlled territories in Syria.

"The United States has ended the ridiculous 230 Million Dollar yearly development payment to Syria. Saudi Arabia and other rich countries in the Middle East will start making payments instead of the US. I want to develop the US, our military and countries that help us!" Trump wrote on Twitter.

Trump has long been promising the US would leave Syria "like very soon", but so far the stabilization money is the only thing that's been withdrawn. American military presence and support for anti-government fighters remains, and, according to diplomat Brett McGurk, is gearing up to a "final phase" of the offensive against Daesh (ISIS or ISIL).