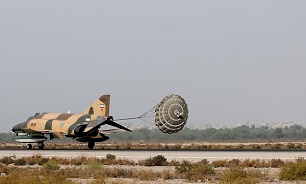 "On the occasion of commemorating September 22 and start of the Sacred Defense (Iraqi imposed war against Iran in 1980-1988) Week, a joint military drill kicked off with participation of IRGC and Army Forces of the Islamic Republic of Iran in the azure waters of the Persian Gulf and Gulf of Oman.” a senior Iranian Army commander, Colonel Yousef Safipour said.

He noted that the war game is the second military exercise that is jointly launched between the IRGC and Army with the aim of evermore readiness for any possible attacks by enemies.

"In addition to showcasing high military power of the Islamic Republic of Iran, this war game conveys the message of peace and friendship to the neighboring states," he said, adding, “If enemies wage military actions against Iran, they will definitely receive a crushing blow.”

In relevant remarks last week, Deputy Chief Commander of Khatam ol-Anbia Centcom for Coordination Brigadier General Ali Shadmani referred to the IRGC's last week missile strikes on terrorists in Iraqi Kurdistan region, and warned that the Iranian Armed Forces will give a crushing response to enemy threats any time, in any form and by an means.

"Protection of people' security is the most important responsibility of the Armed Forces and they will use any necessary tools within their reach to attain this goal. The Islamic Republic of Iran's Armed Forces will adopt any measure any time and in any form it wants to safeguard people's security," General Shadmani said.

He pointed to the last week missile strikes by the Islamic Revolution Guards Corps (IRGC) on the headquarters of the Kurdistan Democratic Party – Iran (KDP-I) terrorist group in the Iraqi Kurdistan region, and said these terrorists have been fighting militarily against the Islamic Republic for the past 40 years, have martyred many defenseless Iranian people and fomented insecurity.

General Shadmani described the KDP-I and Komalah terrorist groups' acts as instances of mercenary missions for the US, Israel and Saudi Arabia, and said that they had promised in an agreement with the IRGC nearly 12 years ago, mediated by former late Iraqi President Jalal Talabani, not to have armed activities against Iran, "but they broke their promise and launched terrorist attacks on Iran's borders and border checkpoints, provoked by Saudi Arabia and the Zionists".