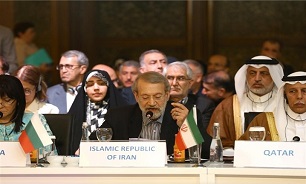 The Iranian parliament speaker on Tuesday delivered a speech to the 3rd Meeting of Speakers of Eurasian Countries’ Parliaments in the Turkish city of Antalya, held with the theme “Economic Cooperation, Environment and Sustainable Development in Eurasia.”

In his address, Larijani said it is necessary for the Eurasian parliaments to close ranks against unilateralism, adding, “The Islamic Republic of Iran believes that the conference members should adopt wise, balanced and active policies to further strengthen the process of multilateralism and redefine and enhance the areas of political, security, economic and trade cooperation.”

On the grounds for cooperation among the Eurasian states, the Iranian speaker proposed plans to broaden parliamentary cooperation and interaction among the governments, private sectors, and regional and international organizations, ease customs regulations, facilitate the free flow of investment, coordinate monetary and financial policies, and use the currencies of the regional nations in trade.

He also denounced the US administration’s withdrawal from the Paris climate agreement, calling on the Eurasian states to devise an appropriate framework for protecting the environment after ratification of the parliaments.

“The illegal and unilateral measures by powers like the US on international issues have created big challenges for the international community, such as that (US) government’s illegal withdrawal from the JCPOA, its unlawful decision about the Palestinian issue and declaring al-Quds the capital of an illegitimate, occupying and aggressive regime, the pullout from the Paris climate deal, and upsetting the world trade’s tariff system,” Larijani stated.

He further slammed Washington’s unilateral and illegal withdrawal from the 2015 Iran nuclear deal and its move to re-impose cruel sanctions against Tehran as a sign of re-emergence of the failed and worn-out policy of unilateralism in the international relations.

Accompanied by a delegation of Iranian lawmakers, Larijani arrived in Antalya on Monday for the Eurasian conference.

The conference is attended by 20 parliament speakers and parliamentary delegations from 17 Asian and European nations.

The first and second editions of the conference were held in Russia and South Korea, respectively.