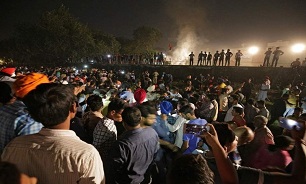 In a statement on Friday, Foreign Ministry Spokesman Bahram Qassemi offered sympathy to the Indian government and nation and the bereaved families of the victims of the deadly crash.

At least 61 people were killed and more than 100 injured after a train ran into a crowd near Amritsar in India's northern Punjab state on Friday.

The victims were standing on the railroad tracks watching celebrations for Dusshera, a Hindu festival marking the triumph of good over evil. People did not hear the train approach as they watched a firecracker-filled effigy of the demon king Ravana burn.

Children are said to be amongst the dead.