TEHRAN (defapress)- Iran, Russia and India held a trilateral meeting in Moscow on Sunday, and exchanged views on the threats of the modern world and obstacles on the path to expanding regional cooperation between the neighboring states.
News ID: 73199 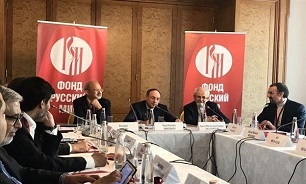 Delegations from Iran, Russia and India attended the two-day trilateral event organized by the Russkiy Mir Foundation, on Saturday and Sunday where the participants discussed means of improving, bolstering and broadening cooperation between Russia, Iran and India.

Iranian Ambassador to Russia Mehdi Sanayee, as well as Chairman of the Political and International Research Institute of Iranian Ministry of Foreign Affairs Seyed Kazzem Sajjadpour represented the Islamic Republic of Iran in the event.

Addressing the meeting, Iranian ambassador to Russia stressed the importance of coordination and trilateral collaborations between the three states saying conduction of joint projects should be facilitated.

The official pointed to the Shanghai Cooperation Organization (SCO), the International North-South Passage, and the Iran-Pakistan-India gas project with the cooperation of Russia as highly important joint initiatives.

Noting that the North-South Passage is of great significance to Iran and Russia, Sanayee said that participation in the project can also be highly important and beneficial to New Delhi.

The official noted that there are trilateral projects in which Iran, Russia and India are involved.

Referring to the long-term strategic ties between the Islamic Republic and Russia, Sanayee said the two countries are making every effort to boost mutual economic ties.

He touched upon Memorandums of Understanding (MOU) between the two countries to facilitate visa issuance, and said that such agreements have been signed between Iran and India in the past.

During the first day of the meeting on Sunday, Chairman of the Committee on Education and Science at the Russian State Duma Vyacheslav Nikonov reiterated Moscow’s interest in expanding ties with the neighbors, and expressed Russia’s readiness to develop bilateral ties with Iran.

Also on Saturday, Iranian envoy to Russia said Sanayee said the world's independent states are coming closer to each other to stand united against US pressures and embargoes.

Sanayee made the remarks on his twitter page, referring to the first day of the trilateral talks among Iran, Russia and India in Moscow over campaign against common threats and emphasis on major plans like North-South corridor.

"The wave of the US unilateralism and sanctions will bring independent world states much closer to each other," he wrote.

The two-day expert-level meeting hosted senior experts and authorities of the three countries to exchange their views on the threats facing the world and also the problems ahead of regional cooperation.