No Way to Re-Negotiate JCPOA

TEHRAN (defapress)- Iranian Ambassador to the UK Hamid Baeidinejad rejected any possibility that Iran would renegotiate the nuclear deal of 2015 with the US.
News ID: 73456 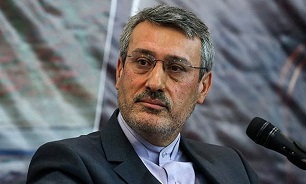 The diplomat made the assertion while speaking at the Oxford Union debating society where he addressed Oxford University students on the topic of the Joint Comprehensive Plan of Action (JCPOA), also known as the 2015 Iran Nuclear Deal.

During the Thursday event, Baeidinejad expounded on the extensive efforts made by European nations to counter anti-Iran US sanctions.

Explaining Iran’s current position on the JCPOA, he said, “The aspiration that we have with the European Union, Britain, France and Germany, China and Russia, is that we keep the Iran Nuclear Deal alive and give time to the U.S. to rethink and revise its position.”

However, he emphasized that any idea of changing or renegotiating the nuclear deal would be “impossible” because if one word is changed other aspects of the deal will either be changed or compromised.

Baeidinejad played a leading role in the negotiation process from 2013-15 and has since worked to protect the deal from US attempts to undermine it.

The ambassador admitted that “we have a total loss of confidence” in negotiating with the US after their withdrawal from the JCPOA, but added that “we are trying very hard with European countries, with China and Russia, to find mechanisms that this deal could (still) be effectively implemented.”

The ambassador said, “There will be pressure against some countries, particularly European countries, and economic and trade institutions from attempting to enter into working with Iran, there will probably be some risks.”

However, he said that he remains sure that there is “total determination” by European countries and other world partners to find “practical solutions” so that the deal will be kept alive.

When asked if the UK has remained independent from the US's hostile position towards the deal, the ambassador said, “Let me confess that we were not really optimistic that (the UK) can keep their position independent but they have remained so, they have tried to be independent and we have seen that they are making real efforts to convince the US that this is not a good policy.”

In the past, the UK has been criticized for adhering to US foreign policy positions without hesitation, but Trump’s withdrawal from the nuclear deal has created an unprecedented divide between the UK, the EU and the US.

The US sanctioning Iran alone without the backing of the United Nations and the European Union is also unprecedented, but the pressure applied by Trump has already forced several major business giants to pull out of Iran, such as the French oil giant Total and US aerospace company Boeing.

However, many other countries are expected to defy US pressure and continue to trade with Iran by setting up new trading platforms to protect significant business transactions and continue buying Iranian crude oil.

With less than 100 hours remaining until the next wave of US sanctions, India, the second largest importer of Iranian oil behind China, has forced the US to provide a sanctions waiver allowing them to continue purchasing Iranian crude.

Ahead of the new set of restrictions, US Secretary of State Michael Pompeo has said Washington expects all oil purchases from Iran to “go to zero,” but added that the government would “consider waivers where appropriate.”

In a related front, Iranian First Vice-President Eshaq Jahangiri assured the nation on Sunday that the US November-4 sanctions would not leave any tangible impacts on the country, playing down Washington's attempts to stop Iran's oil exports.

"The government declares honorably that the US will not be able to stop Iran's oil sale," Jahangiri said, addressing a forum in Tehran.

"The Iranian nation should know that nothing will happen with the second stage of the (US) sanctions; they (the Americans) did whatever they could in the past few months and we have adopted the necessary measures (to confront them)," he added.

Jahangiri addressed the US officials, saying that the only way before them is interaction and talks without any bullying.

Also, last Tuesday, Iranian Oil Minister Bijan Namdar Zanganeh had played down US President Donald Trump's attempts to zero down Iran's crude exports, warning that his threats would only inflame the market.

"Sustainable and stable supply of the crude needed by customers is a feature of Iran and no country has the capacity to replace Iran's crude in the high-demanding global oil market," Zanganeh said.

He stressed that Iran's crude exports may not be stopped, adding, "Inflammation of the global oil market will continue until oil sanctions against Iran will be removed."