TEHRAN (defapress)- Iranian Economy Minister Farhad Dejpasand downplayed the effects of the US new sanctions on his country, saying that Tehran has gained lots of experience in bypassing and coping with embargos in past decades.
News ID: 73613 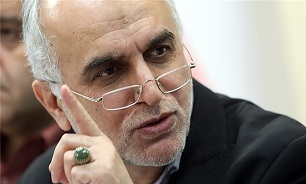 "Living through sanctions conditions is not difficult. We have become experienced in the past 40 years in confronting sanctions," Dejpasand told reporters in Tehran on Saturday.

He noted that Iran will use all economic opportunities to confront enemies, and said, "We have earned good and effective experience in confronting sanctions since the start of the Islamic Revolution and we have devised proper plans to confront the economic embargos."

His remarks came hours after Iranian President Hassan Rouhani said American officials had admitted their incapability to stop Iran's crude sales, and the US sanctions would only leave negative impacts on imports of foodstuff, medicine and medical equipment.

"What the Iranian officials said that the US is not able to zero Iran's oil exports was proved with the US recent admission," President Rouhani said after a trilateral meeting with the parliament speaker and judiciary chief in Tehran on Saturday.

"The US announced that it cannot zero Iran's oil sales because the oil prices will rise to $150; this is what we had said (before). In this region, either Iran's oil is exported or others will be in trouble as well," he added.

President Rouhani referred to the US lies that the foodstuff, drugs and medical equipment were exempted from Washington's sanctions against Iran, and said, "This is incorrect. When the banking system is sanctioned, everything is affected."

The US Treasury Department announced all sanctions on Iran lifted under the 2015 nuclear deal would be back in force on November 5.

The November 5 sanctions were the second batch of bans re-imposed after Trump pulled the US out of the 2015 deal, which was signed by Iran and six world powers in 2015.