TEHRAN (defapress) – Pakistan and Afghanistan, the two estranged neighbors with a history of hostility and bad blood, have made concerted efforts in recent months to open a new chapter in their bilateral relations.
News ID: 74650 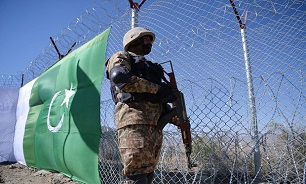 The new government in Pakistan has not only pledged its support to Afghan-led and Afghan-owned peace process, but it has also taken initiatives to remove the trust deficit between the two countries.

One of the sources of conflict between them is the porous 1,500-mile border. The two governments believe terrorists infiltrate through the porous border from both sides and launch attacks. It also allows drug smugglers to do their illicit trade.

The western border, Durand Line, has been the main bone of contention between the two countries as Afghanistan has refused to recognize its legality.

The armies of the two countries have often engaged in cross-border skirmishes, resulting in military and civilian casualties, and escalating political and diplomatic tensions.

Pakistan army, in a bid to seal the border and prevent the influx of terrorists and smugglers, has been constructing a fence along the border. The work was inaugurated by Pakistan’s army chief Qamar Bajwa in May this year.

The first phase of the mega project – 482 km long patch of the border in Khyber Pakhtunkhwa (K-P), has been completed, according to reports.

Pakistani authorities believe it will resolve the issue of terrorism and smuggling quite significantly, which will help in the betterment of ties with Afghanistan.

From the Torkham border crossing, around 1,200 trucks and 10,000 people enter on a daily basis but now only those with proper documents would be allowed to enter the border, officials said.

Special entry cards have been given to 200 Afghan students who live in Afghanistan but study in Pakistan. People in need of medical care will be given permission to enter without documents.

The fencing work on the border will be completed by the end of 2019, according to Pakistan Army’s spokesperson, who hoped that it will benefit peace-loving people of the two countries while restricting the movement of terrorists.

The decision, however, has not gone down well with the Afghan government authorities. While Pakistan insists on building a barrier at the border crossing “to prevent terrorists’ entry into Pakistan”, Afghanistan does not recognize the colonial-era Durand Line drawn up in 1893.

Border incursions and setting up of military bunkers by both Afghan and Pakistani troops along the border in eastern and southern provinces have always sparked political and diplomatic tensions between them.

Afghanistan has often accused Pakistan of interminably firing rockets into Afghan provinces bordering Pakistan, killing civilians and security forces and rendering people homeless. A large number of people in these border provinces – mainly Kunar, Nuristan, Paktika, and Nangarhar – have been forced to evacuate their homes and move to safer locations.

Former Afghan army chief Shir Mohammad Karimi once said these attacks are used as ‘pressure tactics’ by Pakistan to force Afghanistan into recognizing Durand Line as an international border.

But, Pakistan has maintained that it has both external and internal compulsions to secure the border from a security perspective. It has already announced to add as many as 60,000 troops to boost its patrol along the disputed border, to prevent the flow of terrorists and smugglers and illegal refugees.

The political and diplomatic ties between the two South Asian neighbors, once described by the former Afghan president Hamid Karzai as “inseparable brothers”, have worsened in recent years. During the previous government in Islamabad, the relations had touched an all-time low.

Following the political transition in Pakistan this year, the two governments vowed to bury the hatchet and improve bilateral ties. There have been many peace overtures in recent months, which have rekindled hopes of better ties between the unfriendly neighbors.

However, whether the construction of a fence on the border will again put a spanner in their relations is a matter of speculation right now. Both sides have so far refused to work out a compromise formula.