TEHRAN (defapress) – A key Democrat on the US House intelligence committee said the panel plans to start the new session of Congress by investigating President Donald Trump's finances, in a probe which may include examining the Trump Organization’s ties to Saudi Arabia.
News ID: 74801 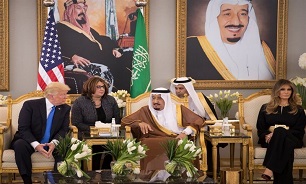 While any investigation would initially focus on whether Trump's business was complicit in money laundering from Russia dating back to the early 2000s, Congressman Eric Swalwell also noted the "hundreds" of hotel rooms Saudi lobbyists booked at the new Trump Hotel in Washington after the president's election victory, the Middle East Eye reported

Following Trump's victory in 2016, the Saudi government and lobbying groups for it have been major customers for the president's hotels.

A public relations firm working for Saudi Arabia spent nearly $270,000 on lodging and catering at his Washington hotel near the White House through March of last year, according to filings to the Justice Department.

Speaking to The Wall Street Journal, a spokesman for the company said that the payments to the hotel came as part of a Saudi-backed lobbying campaign against a bill that allowed Americans to sue foreign governments for responsibility in the September 11 attacks on the US.

The lobbyists reserved rooms at the hotel as part of a scheme that offered US military veterans a free trip to Washington, then sent them to Capitol Hill to lobby against the law the Saudis opposed, according to veterans and organizers.

Attorneys general for Maryland and the District of Columbia cited the payments by the Saudi lobbying firm as an example of foreign gifts to the president that could violate the constitution's ban on such "emoluments" from foreign interests.

The Saudi government was also a prime customer at the Trump International Hotel in New York last year, according to a Washington Post report.

The newspaper quoted an internal letter from the hotel's general manager, who wrote that a "last-minute" visit in March by a group from Saudi Arabia accompanying Saudi Crown Prince Mohammad bin Salman had boosted room rentals at the hotel by 13 percent for the first three months of the year, after two years of decline.

Washington's relationship with Riyadh has been under increased scrutiny since the murder of Saudi journalist Jamal Khashoggi.

The Saudi critic and prominent Washington Post columnist had been living in self-imposed exile in the US when he was killed inside the Saudi consulate in Istanbul on 2 October.