Syria to Rejoin Arab League, Not to Surrender to Blackmail

TEHRAN (defapress) – Syria's Deputy Foreign Minister Faisal Mekdad said those who attempt to impose conditions upon Syria for the nation’s eventual return to the Arab League will not succeed, as Damascus will never surrender to blackmail.
News ID: 75394 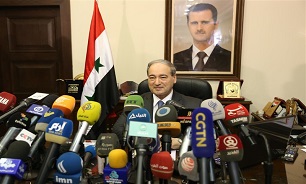 "Those who are trying to ignore Syria or to impose conditions for its return to the Arab League will not succeed, since Syria does not surrender to blackmail,"  Mekdad said late on Sunday, SANA reported.

He added that the decisions that seek to do damage to Syria, particularly those made by other Arab countries, have been instructed by foreign states.

"We follow all developments related to Syria's return to the Arab League and to the resumption of (foreign) embassies' operation (in Syria). However, the pressure that we are facing at the regional level as well as the international arena challenges this process," Mekdad said, adding Damascus was "always optimistic" anyway, given the significant success it has reached in the process of its return to the Arab League.

Earlier, Arab League Secretary-General Ahmed Aboul Gheit asserted that Syria would be allowed to return to the Arab League if all other Arab states give their consent.

The 22-nation Arab League suspended Syria’s membership in 2011 after a foreign-backed war broke out in the country. Several member states then pulled their ambassadors from Damascus. Syria, one of the founding states of the bloc, condemned the decision.

In December 2018, the United Arab Emirates, a league member, became the first Persian Gulf country to reopen its embassy in the Syrian capital. Immediately afterward, Bahrain, another Arab League state, announced that it too would restore its diplomatic mission in Syria.