Top US General Disagrees with Trump over Syria Troop Pullout

TEHRAN (defapress)- The US commander who has been leading the war against Daesh (also known as ISIL/ISIS) stressed that he disagreed with Donald Trump's decision in December to pull troops out of Syria and warned that the terror group was far from defeated, in a stark difference of opinion with the American president.
News ID: 75650 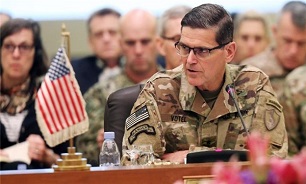 Joseph Votel, the top American general in the Middle East, told CNN on Friday that the Washington-backed forces on the ground in Syria were not ready to handle the threat of Daesh on their own.

Votel, speaking to CNN from Oman, revealed that he would only have declared that Daesh had been defeated, as Trump did in December, if he was sure they no longer posed a threat.

"When I say, 'we have defeated them', I want to ensure that means they do not have the capability to plot or direct attacks against the US or our allies," Votel stated, noting, "They still have this very powerful ideology, so they can inspire."

The commander of US Central Command had previously stressed that he "was not consulted" before Trump's controversial announcement late last year that the US would rapidly withdraw its troops from the war-torn country.

Votel also said that Syrian Democratic Forces (SDF) --- who launched an offensive to oust Daesh from its only remaining enclave in Syria last weekend --- could not defeat the terror group without continued American assistance.

"They still require our enablement and our assistance with this," Votel stressed, adding that the US military was still in the midst of executing a "well-crafted military campaign".

"We want (ISIL) to be able to be controlled or addressed by the indigenous partners, whether that's the Iraqi security forces in Iraq, or the Syrian Democratic Forces in Syria, that when they are capable of handing this threat on their own, without our assistance, that will be another key criteria indicating to me that we have accomplished our mission of defeat of ISIS," he said.

On Sunday, the top US commander said the United States is likely just weeks away from starting the withdrawal of ground troops from Syria ordered by Trump, as the US military has already started withdrawing equipment from the war-torn country.

Votel had cautioned that the exact timing would depend on the situation in Syria, where Washington-backed fighters have launched a final assault against Daesh enclaves near the Iraqi border.

Asked whether the withdrawal of America’s more than 2,000 troops would begin in days or weeks, Votel had stated that “probably weeks. But again, it will all be driven by the situation on the ground”.

“In terms of the withdrawal ... I think we’re right on track with where we wanted to be,” Votel told reporters traveling with him during a trip to the Middle East, adding, “Moving people is easier than moving equipment and so what we’re trying to do right now is again (to) kind of clear out those materials, that equipment, that we do not need.”

In December, Trump declared the Daesh terror group defeated in Syria and announced American troop pullout from the country but gave no timeline. Last week, he stated that the United States will likely announce next week that all of the Daesh caliphate has been retaken in Syria and Iraq.

The surprise announcement resulted in the resignation of Secretary of Defense James Mattis, US anti-Daesh coalition envoy Brett McGurk and Pentagon Chief of staff Rear Admiral Kevin Sweeney who disapproved of the American president's decision.

US officials have long estimated that the Syria pullout could take until sometime in March or April to execute fully, but have been reluctant to set an exact timeline given hard-to-predict battlefield conditions. Votel did not speculate about when the drawdown would be completed.

Votel stated that he did not believe the United States would broadly increase overall troop numbers in Iraq. He did leave open the possibility of changing the composition of forces to help the United States keep pressure on the militant group.

Referring to future US troop levels in Iraq, Votel said that “I think it’s going to remain more or less steady", adding that “this isn’t just wholesale — ‘Everybody in Syria move over to Iraq’. That doesn’t make sense".

Votel had stated that he had not been asked for advice by Trump on a decision that 2,000 American troops stationed in Syria would be pulled out of the war-torn country.

"I was not aware of the specific announcement. Certainly we are aware that he had expressed a desire and intent in the past to depart Iraq, depart Syria," Votel said during a hearing held by the Senate Armed Services Committee.

During his testimony, Votel dismissed Trump's claims that Daesh has been defeated and stressed that the fight against the terrorist group was "not over", warning the Takfiri outfit could regroup after US troops left.

“It is important to understand that even though this territory has been reclaimed, the fight against ISIS and violent extremists is not over and our mission has not changed,” he told the Senate hearing.

“We do have to keep pressure on this network ... They have the ability of coming back together if we don’t,” Votel added.

The top US intelligence officials also told the Senate Intelligence Committee last week that Daesh “will exploit any reduction in [counterterrorism] pressure to strengthen its clandestine presence and accelerate rebuilding key capabilities”.

The US Senate has also backed an amendment opposing Trump’s plans for a quick withdrawal of American troops from Syria and Afghanistan, citing concerns that such moves will benefit Russia and Iran.

A UN report seen by Reuters last week estimated there are up to 18,000 Daesh militants in Iraq and Syria, including up to 3,000 foreign fighters. It warned the group was interested in attacking aviation and using chemical, biological, radiological and nuclear materials.

The US deployed troops and equipment to Syria in 2014 as part of a Washington-led coalition that is supposedly fighting Daeh.