TEHRAN (defapress) – A shocking report from Oxfam says families in Yemen are selling their daughters as young as three to stave off hunger as Saudi warplanes continue to bomb residential areas in the impoverished Arab country.
News ID: 75994 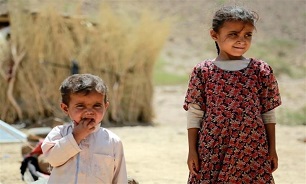 The humanitarian organization said the Saudi-led aggression, rising food prices and plummeting incomes in Yemen are forcing people to resort to desperate measures.

"Since the escalation in conflict in 2015, food prices in Yemen have soared while household incomes have plummeted, pushing the costs of basic foods beyond the reach of many," according to the report carried by the official website of Oxfam recently.

The United Nations hopes to raise $4 billion this year for Yemen to help combat the crisis.

"Twenty million people cannot reliably feed themselves or their families," said the UN Secretary-general Antonio Guterres in a meeting in Geneva.

"Almost 10 million are just one step away from famine."

Oxfam said a family in Yemen sold their three-year-old daughter so they could buy food and shelter and save the rest of the family.

Since March 2015, Saudi Arabia and some of its Arab allies have been carrying out attacks against the Houthi Ansarullah movement in an attempt to restore power to fugitive former president Abd Rabbuh Mansour Hadi, a close ally of Riyadh.

Thousands of Yemenis, including thousands of women and children, have lost their lives in the deadly military campaign.