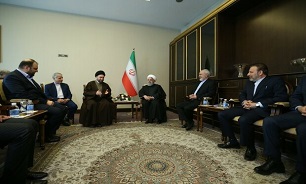 During the meeting, the two sides discussed the latest regional issues as well as ways to expand bilateral cooperation in different fields.

He also received Iraq’s National Security Advisor Falah al-Fayadh. During the meeting, the official expressed gratitude for Iran’s support to the Arab country in the fight against the ISIL terrorists.