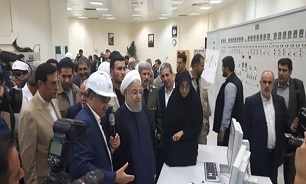 During an inaugural ceremony in the southern coastal city of Kangan on Sunday, President Rouhani officially launched phases 13, 22, 23, and 24 of South Pars gas field, noting that despite all the US pressures on the Iranian nation, specially through the imposition of unilateral economic sanctions, Iranians remain steadfast and resistant and continue to progress.

“Americans did not want us to inaugurate any important projects during the current year, but we made all projects operational on schedule,” Rouhani said.

“Today is a very auspicious day for the Iranian nation, which has dealt strong blows to enemies, because they thought that by imposing sanctions, they would be able to stop all our plans and advances,” Rouhani added.

Elsewhere in his remarks, Rouhani said, "Enemies thought that they would mount such economic pressure on (the Iranian) people that our people would bend the knee in front of superpowers. However, this great and history making nation has demonstrated its steadfastness and resistance at all junctures of its history, especially during the current year, which is nearly finished.”

“Before being an economic war, sanctions are psychological war through which America is trying to make the Iranians pessimistic about their future … and make them think that as time goes by, their conditions will deteriorate,” Rouhani said.

Saying that production of gasoline in Iran has been doubled since the inauguration of his administration, Rouhani said, “During recent rounds of sanctions, we saw that the United States did not even think about imposing gasoline sanctions on Iran, because it knew that Iran has become self-sufficient in gasoline production. Today, we are also self-sufficient in producing diesel fuel and gas.”

The South Pars gas field, divided into 28 phases, is located in the Persian Gulf on the common border between Iran and Qatar. The field is estimated to hold 14 trillion cubic meters of gas as well as 18 billion barrels of condensates.