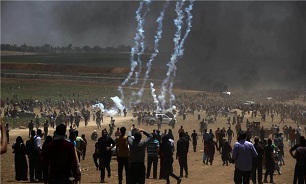 The Palestinian Ministry of Health in Gaza announced that two Palestinians aged 29 and 18 years old were killed by Israeli live fire, Palinfo reported.

At least 66 Palestinians, including medics, were injured by live ammunition and tear gas canisters.

Hundreds of Palestinians marched along the border between the Gaza Strip and the 1948 occupied Palestinian territories on the 51st Friday of the Great March of Return.

The demonstrators waved Palestinian flags and raised portraits of the Palestinian martyrs killed by the Israeli occupation recently in the West Bank.

They also voiced their support for the Palestinian prisoners in Israeli jails who have been lately subjected to inhumane treatment by the Israel Prison Service.

The Great March of Return was launched in late March 2018 to demand the return of the Palestinian refugees expelled from their lands in 1948 and pressure Israel to left the blockade on Gaza.

Since the start of the border protests, the Israeli occupation army has killed 271 Palestinians and injured 31,000 others, 500 of whom are in critical condition.

According to the Ministry of Health in Gaza, the Israeli army is still holding the bodies of 11 Palestinian martyrs killed on Gaza border.