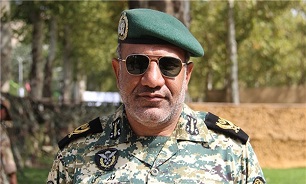 "All 14 helicopters of the Army's Airborne Unit and the Ground Force, used for transferring equipment, are at the service of Lorestan province's crisis management headquarters," General Nemati told FNA on Wednesday.

He added that given the current conditions and people's need to relief and rescue operations, the Army's Ground Force is helping the flooded people under the supervision of Lorestan province's crisis management headquarters.

In relevant remarks on Tuesday, Commander of the Islamic Revolution Guards Corps Ground Force (IRGC) Brigadier General Mohammad Pakpour who was in the flood-stricken Lorestan Iran had also announced dispatch of helicopters and engineering units as well as establishment of a field hospital in the province.

Also, a senior Iranian Army official in Lorestan said that several amphibious personnel carriers had been sent to Khorramabad, the capital city of the province, to be used for aiding operations.

Meantime, Commander of the Navy's Airborne Unit General Pilot Mansour Rouh Ol-Amini said that several helicopters, patrol, reconnaissance and cargo planes of the Unit along with a group of marine forces for special operations and 16 boats, special for relief and rescue operations, have been sent to the flooded areas in Western and Southwestern Iran on Tuesday morning.

Also, Commander of the Army's operations in the crisis management headquarters of Khuzestan province Rear Admiral Habibollah Sayyari told FNA on Tuesday that the Army Ground Force's drones had taken online images from all geographical situations in the Southwestern province to accelerate aiding operations and prevent the dangers resulting from any possible flood in the future.

Meantime, a spokesman of the Law Enforcement Police force Brigadier General Ahmad Nourian announced that 4,000 police forces had been sent to the flood-stricken areas across Iran to establish security.

In relevant remarks earlier on Tuesday, Commander of the Iranian Army Ground Force Brigadier General Kiomars Heidari announced that 4 helicopters hd been dispatched by the army to the flood-stricken areas in Pol Dokhtar region in Western Iran.

"Given the need for aiding people via air, 4 helicopters of the airborne unit of Masjed Soleiman city of Khuzestan province have been sent to Pol Dokhtar in Lorestan province," General Heidari said on Tuesday.

He added that the helicopters were equipped with night-vision equipment to continue relief and rescue operations at night too.

All air and ground routes to Pol Dolhtar had been blocked on Monday due to the heavy flash floods and bad weather conditions.

100 units of the Army have mobilized all their possibilities to help the flooded areas across Iran, a spokesman said last Monday.

"100 Army units are active in flood-stricken areas and all air bases and airborne and naval units have been ordered to send planes and helicopters at the demand of the towns and cities' crisis-management headquarters," Spokesman of the Iranian Army General Shahin Taqikhani told FNA on Monday.

Also, on Monday, Iranian First Vice-President Eshaq Jahangiri ordered mobilization of all possibilities and equipment of several bodies, including the municipalities of large cities, to aid the people entangled in unprecedented floods in different parts of the country.

"I have ordered the interior minister to mobilize and use the possibilities of municipalities of large cities to help the flood-stricken provinces," Jahangiri told reporters before leaving the flooded province of Lorestan in Western Iran for Khuzestan province in the Southwestern parts of the country which has been put on alert too due to the high volume of water flowing as a result of the recent showers.

He appreciated all Armed Forces and governmental bodies for their assistance to control the situation in flooded areas, and asked them to continue efforts to protect people's lives and properties during the upcoming showers in the Western and Southern parts of the country.

All Iranian Armed Forces and governmental bodies have rushed to help the flood-hit people in different parts of the country.

On Sunday, Commander of Iran's Army Major General Abdolrahim Moussavi traveled to the Northern province of Golestan, emphasizing protection of people's life as a priority.

He underlined the need for efforts to empty the flood-stricken areas of water as soon as possible and preparedness for future showers and more floods.

"We will make our utmost efforts, under the management of Golestan province's governor-general office, to resolve the existing problems for people," General Moussavi said.

Also, Commander of the Islamic Revolution Guards Corps Major General Mohammad Ali Jafari underlined on Saturday that the IRGC was prepared to mobilize all its possibilities to reconstruct the houses and villages destroyed in the recent devastating floods in Iran.

General Jafari made the remarks during his visit to a flood-stricken village in the Northern province of Mazandaran.

He called on the government to pay the loans considered for the flood-hit people as soon as possible so that the IRGC will be able to help them in reconstruction of their houses.

"The bodies like Basij (volunteer forces), the IRGC, Army and the jahadi groups which are responsible for relief operations should accompany people to resolve the problems and adopt effective measures to reconstruct and clean the towns," General Jafari said.

General Jafari had also on Saturday traveled again to Golestan province, one of the main centers of the recent floods in Northern Iran.

"We have mobilized all our possibilities to resolve the problems in Golestan province although a part of the IRGC's possibilities are engaged in other provinces, including Khuzestan, which have been flood-stricken too," General Jafari told reporters.

He expressed the hope that the problems would be settled as soon as possible with correct management and concentration on priorities.

Iranian authorities announced on Monday that the death toll from flash floods across the country had risen to 57 so far.

The Gate of Quran has been built on a dry river bed and ten minutes after the start of sudden torrential rains at around 11:00 am local time on March 25 more than 50 cars were washed away to the down of the slope into the city. Hitting trees and other streets signs and curbs the overrun cars piled up one another a kilometer down from the city gate.

Governor General of Fars Province Enayatollah Rahimi said that the sudden flash flood happened in less than 10 minutes with the flow of water from Allah-o-Akbar gorge converging into the main road and affecting the moving vehicles.

The Director General of the provincial office of Iran Meteorological Organization in Shiraz Masoud Dehmalayee said that in parts of the city precipitation rates overpassed 107 percent on March 25.

The public relations department of the regional water organization of Fars Province also said that all dams in Fars were sitting pretty with 1.5 billion cubic meter unfilled capacity “which is perfectly capable of containing an flood water”.

In the Southwestern province of Khuzestan flash floods cut off many roads including Andika road connecting Andika to Shehr-e-Kurd, the capital city of the neighboring province of Chaharmahal and Bakhtiari.

Iranian President Hassan Rouhani, in a statement last week, offered condolences to the bereaved and affected families, and ordered swift reaction by all relevant executive bodies and aid agencies.

He also tasked the interior minister and the governor general of Fars province to explore the reasons behind the March 25’s deadly flood in the city of Shiraz and deal with all possible parties who have failed to fulfill their duties in this regard.

He had already last Sunday put all governors, governors general and officials in all Iranian provinces on full alert as widespread flooding continued in many parts of the country.

Iran's IRGC announced in a statement on March 24 that units of its Aerospace Force had been dispatched to help people stricken by flood in the Northern Iranian province of Golestan.

The statement added that the IRGC forces are using helicopters to provide flood-hit people with provisions, including food and drinking water, and transfer necessary equipment for relief workers.

Campaigns calling for collecting donations to help the flood-hit families have been launched by aid agencies, celebrities, and public figures.

Campaigns are aimed at raising money and gathering basic commodities required to start the reconstruction and rehousing operations. Imam Khomeini Relief Foundation (IKRF) offices around the country are ready to receive the aid data-x-items and deliver them to the flooded areas.

On March 23, Supreme Leader of the Islamic Revolution Ayatollah Seyed Ali Khamenei called on officials and the nation to assist the flood-affected people.

The Leader’s official website has since been updated with a new feature that allows direct contribution to relief efforts.

Iranian celebrity figures have also joined in on the effort by encouraging their huge online fanbase to help relieve the difficult situation.

It was reported on March 25 that donors have already contributed large sums of money to speed up the reconstruction process in Mazandaran.

Chif of Staff of the Iranian Armed Forces Major General Mohammad Hossein Baqeri said after the floods that he had ordered additional and coordinated efforts to help the relief campaign.

He has authorized commanders in the IRGC, the Iranian army, police, and the defense ministry to use forces under their command to provide “full and organized” assistance in flood-hit areas in a coordinated manner.

General Baqeri has appointed his deputy, Major General Ataollah Salehi, as the field commander at the head of a group of high-ranking military chiefs to coordinate relief efforts between the armed forces and civilian organizations on the ground.

Interior Minister Abdolreza Rahmani Fazli, who has been touring the flood-hit regions, told reporters that relief efforts had been going forward at a strong pace thanks to coordination among all sides.

Authorities in Aqqala, one of the cities hardest hit by flooding, said they had to detonate a small part of the railway network in the area in order to speed up drainage and prevent greater damage to the tracks.

During the operation, explosives were placed underneath the tracks to help drain the flood waters.

According to local officials, no parts of the tracks were damaged in the explosion and the network would resume operations soon.