CBI gov. in Iraq for talks on banking transactions

TEHRAN (defapress) – Governor of Central Bank of Iran, Abdolnaser Hemmati, has traveled to the Iraqi capital Baghdad to follow up on the implementation of banking agreements between the two sides, according to an informed source.
News ID: 76988 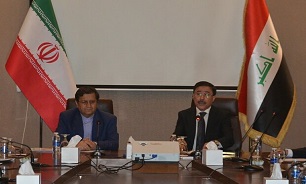 The visit of the Governor of Central Bank of Iran, Abdolnaser Hemmati, to Baghdad aims at following up on the implementation of monetary and banking agreements which were signed between the two sides during the visit of President Hassan Rouhani to Baghdad, and the visit of Iraqi Prime Minister Adil Abdul-Mahdi to Tehran, an informed source told IRNA on Monday.

Hemmati arrived in Baghdad on Sunday, and held talks with Prime Minister Abdul-Mahdi, Minister of Finance Fuad Mohammed Hussein, as well as his Iraqi counterpart, according to the source.

This is Hemmati’s third visit to Iraq since the start of 2019. During a visit of an Iranian banking delegation headed by Hemmati to the neighboring country back in February the central banks of Iran and Iraq signed an agreement to remove barriers to bilateral financial and banking relations in the face of US anti-Iran sanctions. The deal focuses on a new mechanism to facilitate the repayment of Iraq’s electricity and gas dues to Iran and open a channel for the businesses of the two countries to conduct their mutual transactions.