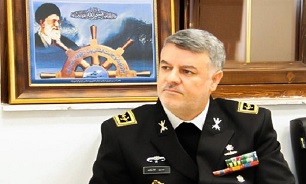 He made the remarks on Wed. in his meeting with Zafar Mahmood Abbasi Commander of Pakistan Navy Force on the sidelines of 70th anniversary of Communist China's Navy.

In this meeting, Commander of Iranian Army Navy Rear Admiral Hossein Khanzadi emphasized that naval forces of Iran and Pakistan are pursuing a golden period of good cooperation and interaction in line with strengthening maritime security, adding, “given the complicated situation overshadowing the world, Islamic Republic of Iran will not let dominant countries stop development and growth of naval cooperation between Iran and Pakistan.”

Khanzadi also referred to the dispatching of Iranian navy forces to Pakistani ports in line with developing bilateral interaction and exchanging information in the technical and training fields and reiterated, “Iranian Navy always welcomes arrival of Pakistani navies to Iranian ports wholeheartedly.”

For his part, Zafar Mahmood Abbasi Commander of Pakistan Navy Force called for more development and interaction of naval forces of Iran and Pakistan in international arena.

To restore regional peace and security, the two countries should always establish incessant cooperation and interaction with each other, he said, adding, “undoubtedly, exchange of navy forces between the two countries will be effective in boosting bilateral ties in relevant field.”