US presence in Persian Gulf 'just for show

TEHRAN (defapress) – Commander of the Iranian Army's Navy Rear Admiral Hossein Khanzadi said that the presence of US naval fleet in the Persian Gulf region is just for show, deeming it "futile" and "deceptive".
News ID: 77371 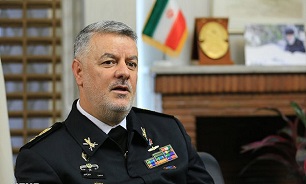 "I don't know why this [US] naval fleet is receiving so much attention," he told Mehr News Agency on Sunday, adding that during the past 40 years after the Islamic Revolution, US forces have always been present near Iran's borders.

"The presence of the Americans in the Persian Gulf region has reached its end and they must leave the region", he also added.

"Their presence is just for show, futile, and deceitful," he highlighted.

Tensions have raised between Tehran and Washington after Trump administration's decision in May 2018 to withdraw from the Nuclear Deal, also known as Joint Comprehensive Plan of Action (JCPOA), and to re-impose sanctions which were lifted under the JCPOA. US pressure campaign on Iran is not limited to sanctions: it has also put Iran's Islamic Revolutionary Guards Corps (IRGC) on its list of foreign terrorist organization.

Iran, in response, has designated US Central Command (CENTCOM) in the Middle East as a terrorist organization. After a year since US' withdrawal from the nuclear deal, Iran announced it would reduce some of its commitments under JCPOA, urging other signatories to comply with their own commitments and stand against the US unilateralism.