TEHRAN (defapress) – Iran’s Foreign Ministry dismissed as “surprising” the recent bogus allegations that Canada has made against Tehran, saying the Ottawa government’s “illegal and unconventional” measures against Iran have ruined the good ties the two countries had in the past.
News ID: 77500 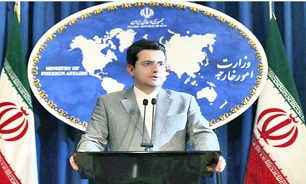 In a statement on Tuesday, Foreign Ministry Spokesman Abbas Mousavi said the “surprising” allegations levelled against Iran in a recent statement by the Canadian Department of Global Affairs have been stimulated by the North American country’s election campaigns.

The anti-Iran accusations also indicated that the Canadian government is deliberately ignoring the realities, he deplored.

Mousavi further underlined that the government of Canada has taken illegal and unconventional measures against the Islamic Republic of Iran and must be held responsible for these actions.

“Unfortunately, these unlawful and unilateral measures have destroyed the good interactions the two countries had in the past,” he concluded.

On Sunday, Canada's Department of Global Affairs released a statement saying its representatives “continue to work closely with our allies and partners to hold Iran to account” for what it called Tehran’s role in regional tension.