TEHRAN (defapress)- The US could use a variety of economic, military and ideological strategies to “overextend and unbalance” Russia, a new report sponsored by the US Army glaringly suggested, offering blueprints to divide and destabilize the country.
News ID: 77532 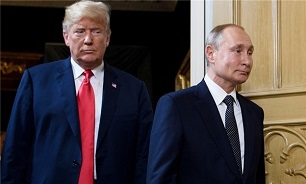 The study examines “nonviolent, cost-imposing options” that the US and its allies could employ to weaken Russia’s economy, military and government structures — and was conducted by the RAND Arroyo Center —  the US Army’s federally funded research arm, RT reported.

While US officials and mainstream media fret constantly about vague and unverified claims of Russian “meddling”, “interference” and efforts to “sow discord” in US society, the RAND report openly details a shameless plot to drum up social discontent and societal divisions – in Russia.

The report said Russia suffers from “deep seated” but “exaggerated” anxieties about the possibility of “Western-inspired regime change”. Evidently the authors didn’t recognize the irony of calling those concerns “exaggerated” in a document dedicated to describing specific ways to do just that.

Indeed, the document added that the US could “create the perception” that the Russian government is “not pursuing the public interest” and could “encourage domestic protests” which might distract the government and render it “less able or inclined to threaten Western interests abroad”.

This strategy probably would not work however, the document admitted.

Coming on the heels of two years of hysteria over alleged Russian interference, the document provided a disturbing insight into the ‘do as we say, not as we do’ ideology of US exceptionalism — and of course, there has been no media scramble to highlight Washington’s interfering ways or call out the glaring hypocrisy.

In the economic realm, the report suggested that measures like expanding US energy production and imposing harsher trade and financial sanctions would help to “stress” and “degrade” the Russian economy.

One particularly Machiavellian idea, the study suggested, would be for the US to find ways to encourage “skilled” and “well-educated” Russian youth to emigrate.

Such a plan would have “few costs or risks” and would help the US while hurting Russia, it says. Unfortunately the negative effects for Russia would only be felt over the very long term, it added.

Geopolitically, the report offered that US could consider providing more “lethal aid” to Ukraine, but acknowledges this option could lead to a “much wider conflict”.

Increasing US support to Syrian rebels is another option, but could result in similarly unsavory outcomes, including damaging efforts to combat Islamic terrorism, it conceded.

The US could also try to reduce Russian influence in Central Asia, promote uprisings in neighboring states and “flip Transnistria” and expel Russian troops from the unrecognized, mostly Russian-speaking region that  broke away from Moldova after the Soviet Union collapsed in 1991. However, the authors resign themselves to the fact that most of these options would be difficult to carry out, could prove costly to the US, and may not even have the desired effect.

Militarily, the US could reposture its bombers “within easy striking range of key Russian strategic targets” in order to “raise Russian anxieties”. Washington could also start “deploying additional tactical nuclear weapons” to Europe and Asia (also to “heighten anxiety” in Russia) and force Moscow to increase investment in its air defenses. The development of new “long-range bombers” and “space-based weapons” would also worry Moscow, but here the US risks “being drawn into arms races” that could backfire, the report warned.

On the waves, the US could increase its presence in Russia’s “operating areas” including the Black Sea (although it would be “more dangerous” for the US to operate in this region during a conflict, it said).

Ultimately, the document read like an exercise in projection, a list of provocations that Washington could carry out against Moscow while claiming they are merely defensive responses to alleged Russian aggression and publicly dismissing Russian concerns as mere “paranoia”.