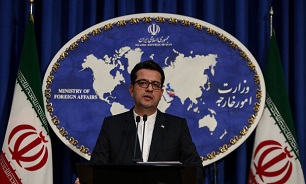 “We no longer have any hope to see the INSTEX [Instrument for Supporting Trade Exchanges] in action… If the mechanism was ever going to work, it would have done so by now,” Abbas Mousavi addressed a press conference on Monday, referring to the recent visit by the German banker, Per Fischer, the head of INSTEX, to Tehran.

European signatories of the 2015 nuclear deal, including Germany, claim they are trying to keep the accord alive by launching the long-awaited INSTEX to help Iran reap some benefits from the Joint Comprehensive Plan of Action (JCPOA).

However, Iran says the Europeans have not done enough to save the nuclear deal, and the US violation of the JCPOA has barred Tehran from benefiting from the economic dividends of the JCPOA.

“We expected the Europeans to fulfill their obligations to the JCPOA after the US’ withdrawal from the pact,” he said, adding that “however, they either were not able to, or did not want to do so.”

“We have not seen any practical move by the Europeans in the past days [since the 60-day ultimatum], and we hope that they will take effective actions in the remaining days,” Mousavi said.

“Otherwise, we will take the second step [regarding the JCPOA commitments],” he stressed.

Running out of patience with the EU's inaction in the face of the growing US pressure, Iran reduced its commitments under the deal on May 8, and warned the EU that it would consider leaving the accord after 60 days if its demands were not met.

Elsewhere, Mousavi referred to German Foreign Minister Heiko Maas’s trip to Tehran, saying that the visit will be focused on the JCPOA.

“JCPOA is the base of our talks [with other parties to the deal], and we will not discuss anything beyond that.”

“We strongly believe that the important matter here is the commitment of all the parties to the deal.”

While pretending to be in the same boat with Iran when it comes to the nuclear deal, Europeans support the US administration's pressures on Iran over its legitimate defensive capabilities, including its missile program, as well as its regional influence.

Maas, who is currently in Tehran, is expected to discuss matters on saving the Iran deal and easing the Iran-US tensions.

However, the European diplomat coordinated his trip with France and Britain, and also discussed it with US Secretary of State Mike Pompeo, creating the idea that he would seek to use the trip for pressuring Tehran into giving up its missile defense program.

In Abu Dhabi on Sunday, the German foreign minister said that, in his talks, he would stress his country's concerns about Iran's missile program and its activity in Syria and Yemen.

Iran has always said its nuclear activity is peaceful and stresses that its missile and military capabilities are non-negotiable.