TEHRAN (defapress) – The foreign ministers of France, Britain, and Germany are scheduled to convene in Brussels on Monday to discuss the latest developments around the 2015 nuclear deal between Tehran and world powers.
News ID: 78074 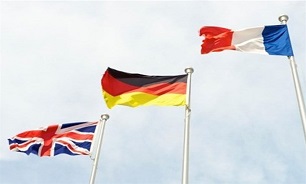 According to Reuters, the three European foreign ministers will seek to flesh out how to convince Iran and the United States to reduce tensions and initiate dialogue when they meet in the Belgian capital.

In a joint statement on Sunday, the three countries, who are party to the deal alongside Russia and China, said the time has come to “act responsibly and to look for ways to stop the escalation of tension and resume dialogue.”

In a televised speech on Sunday, Iranian President Hassan Rouhani said Iran is ready to hold talks with the United States if Washington lifts all sanctions and returns to the 2015 nuclear deal.

US President Donald Trump's administration says it is open to negotiations with Iran on a more far-reaching agreement on nuclear and security issues.

But Iran has made any talks conditional on first being able to export as much oil as it did before the US withdrew from the pact.

In May 2018, Trump pulled his country out of the deal, known as the Joint Comprehensive Plan of Action (JCPOA).