TEHRAN (defapress) – Iran and Bolivia have signed a Memorandum of Understanding (MoU) to expand the level of their cooperation on nano and advanced technologies.
News ID: 78164 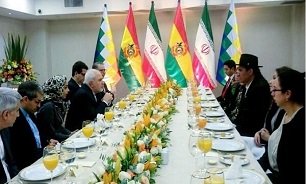 The MoU was signed by Iranian Foreign Minister Mohammad Javad Zarif and his Bolivian counterpart Diego Pary Rodríguez during Zarif’s visit to EMI University in Reberalta on Tuesday.

As per the agreement, Iran will provide the grounds to establish an expert nano laboratory in EMI University and launch BSc and PhD courses on nano technology in the framework of south-south developmental cooperation.

During the signing ceremony, Zarif expressed Iran’s readiness to share its achievements with the nations not supporting unilateralism and the world arrogance.

The top diplomat noted that Iran has made achievements in defensive, nuclear, scientific and technology fields, because of giving preference to its national and domestic capability in the past 40 years.

Zarif said that the developing states would better close their eyes to colonial states’ support and instead, trust their own domestic capacities as the key to achieve their national economic aspirations, on the one hand, and preserve the independence, on the other.

The mentioned cooperation plan is aimed at making potential the Bolivian elites in nano-technology field and in producing knowledge-based products jointly.

Javad Zarif arrived in Santa Cruz, Bolivia on Tuesday on the last leg of his tour to three Latin American countries, after visiting Venezuela and Nicaragua.