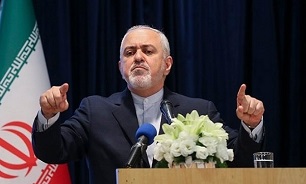 “When it comes to Iran's territorial integrity and waters, we will stand on ceremony with nobody and will not negotiate with any party about honors Iran has gained during the past 40 years …. The administration is committed to this issue and the parliament has the final say on it,” Zarif said on Monday, while addressing an open session of the Iranian parliament with regard to the Caspian Sea legal regime and Iran's share of the seabed and its resources.

Iran's foreign minister added that following the collapse of the former Soviet Union (USSR), Iran's diplomatic apparatus did its best to safeguard Iran's interests in the Caspian Sea, adding, “Although these negotiations have been very difficult, all our efforts were focused on protecting Iran's interests”.

“A glance at the history [of Iran] will show that parts of Iran were separated [from the country] under previous [monarchial] dynasties and it was only under the Islamic Republic that despite the imposed war [with Iraq] and tremendous pressures, not a handspan of the country’s soil has been lost and this is a great honor for Iran's leadership and people,” Zarif noted.

Iran's foreign minister also told lawmakers that necessary guarantees have been taken from other littoral states of the Caspian Sea not to make any decision on the sea’s legal regime in the absence of Iran, because “the issue of the Caspian Sea, unlike the issue of the Arvand River between Iran and Iraq, is not a bilateral issue … and is covered by the agreement signed in 1975”.

Elsewhere in his remarks, Zarif noted that the convention on the legal status of the Caspian Sea was signed “with open eyes” by leaders of the five littoral states on August 12, 2018, adding that Iran will never compromise on its interests on the basis of mere trust in other countries.

The Caspian Sea convention was signed by Iranian President Hassan Rouhani and his counterparts from Russia, Azerbaijan, Kazakhstan, and Turkmenistan, Vladimir Putin, Ilham Aliyev, Nursultan Nazarbayev and Gurbanguly Berdymukhamedov, respectively, after the 5th Caspian Summit in the Kazakh port city of Aktau.

The Caspian Sea convention is drawn up in 24 articles with the most important highlights being a ban on military presence of all foreign countries in the sea and transit of military consignments belonging to foreign countries.

The convention emphasizes that the Caspian Sea belongs to all littoral states, prohibiting establishment and handing over of any kind of military bases to foreign countries.

The Caspian Sea Legal Regime Convention also puts emphasis on sovereignty and sovereign rights of the littoral states while recognizing their right to decide on the sea.

The 4th meeting of the 5 littoral states of the Caspian Sea to finalize the water body’s maritime safety protocol was held in Tehran in December.

Representatives from Russia, Azerbaijan, Turkmenistan, and Kazakhstan joined their Iranian counterparts in Tehran to attend the 4th meeting of the littoral states of the Caspian Sea on the protocol for maritime safety in the water body in December 10-11, 2018.

In his opening address at the meeting, Deputy Director of Iran's Port and Maritime Organization Hadi Haqshenas said that the Caspian Sea is a very important water passage in terms of geopolitics, place in the juncture between the North and the South with high volume of cargo and passenger vessel traffic.

The Iranian maritime official referred to the joint efforts of the five littoral states to draft and ratify the legal regime convention of the Caspian Sea, and added that the convention’s status in the final stages of being ratified by the five countries paves the way for efforts to adopt the protocol for maritime safety in the sea.

He then reviewed the history of the meetings between the littoral states for reaching an agreement on maritime safety protocol from 2010 in Azerbaijan, to 2017 in Turkmenistan, and third one in May 2018 Tehran.

Haqshenas then highlighted that Iran believes in efficiency of the standards set by the International Maritime Organization (IMO), and is after using the experiences gained through the frameworks of the IMO.

The meeting participants are slated to discuss improving safety of vessels in the Caspian Sea, mechanisms in search and rescue operations, oversight and inspection of vessels, as well as protection of the marine environment.